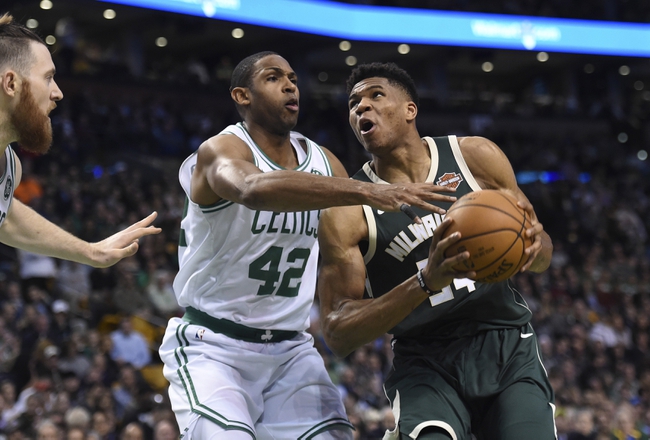 The Boston Celtics and Milwaukee Bucks meet in the first round of the Eastern Conference Playoffs.

Point Guard - Terry Rozier is a fearless player who won’t shy from the moment of replacing the injured Kyrie Irving, and he seems to thrive under the bright lights. Eric Bledsoe has been underrated for years, but he’s never been able to take that next step. Overall, I have a man crush on Rozier and think he has star potential at some point. Bledsoe is solid, but lacks that something extra.

Shooting Guard - Tony Snell has shot over 40 percent from deep back-to-back seasons, but he’s never been a double-digit scorer in his career. Jaylen Brown went from being the hustle player who makes winning plays to also becoming a 46.5 percent shooter from the field and a 39.5 percent shooter from deep. Brown is another youngster who you find yourself rooting for and usually ends up making big plays down the stretch. The Bucks don’t have that at shooting guard.

Small Forward - Khris Middleton returned from injury and is enjoying his best season yet, averaging 20.3 points on 46.8 percent shooting and dishing four assists. Middleton is truly one of the most underrated players in the league. Jayson Tatum is beyond his years and would be in the rookie of year conversation if it weren’t for Ben Simmons and Donovan Mitchell. Probably a toss-up, but Middleton has the experience and is much easier to trust in big games, something Tatum has yet to experience.

Center - Aron Baynes does a nice job of cleaning up in the paint and can give Boston some easy buckets here and there. John Henson is a lengthy 6’11” who has a much better feel around the basket and is a more polished rim protector. Baynes helps Boston greatly in his limited minutes, but Henson is easily the better player and will provide more of an impact in this series.

Power Forward - Al Horford is a consistent all-star caliber player who probably hasn’t gotten enough love over the years, but even he would tell you he’s not the Giannis Antetokounmpo. The Bucks have one of the best players in the world on their team, and it’s the one area that really gives them a chance to win this series. Antetokounmpo will be the best player on the court in this series and if he gets cooking, watch out.

Bench - The main reason the Celtics finished with the second seed despite countless injuries is because of their depth. Marcus Morris has made big shots all season, Marcus Smart frustates at times, but he comes through in the clutch with a game changing play, and guys such as Greg Monroe and Shane Larkin have held their own when called upon. For the Bucks, the return of Jabari Parker is massive, Brandon Jennings is an upgrade at backup point guard and Jason Terry seems to always make a timely three. I give the edge the Celtics because of the overall depth.

Coach - Joe Prunty is a two-time champion as an assistant and had his moments after the firing of Jason Kidd, but he has less than a full season under his belt as a head coach. Brad Stevens has been widely considered one of the top coaches in the league and his in-game adjustments have been key. The Celtics are usually a better second half team because of Stevens. Few coaches can change the game like the guy leading the Boston Celtics.

Overall - Celtics in 6 (Closer than expected series, but the Celtics depth, nasty home crowd and advantage in head coach gets them out of this physical series)