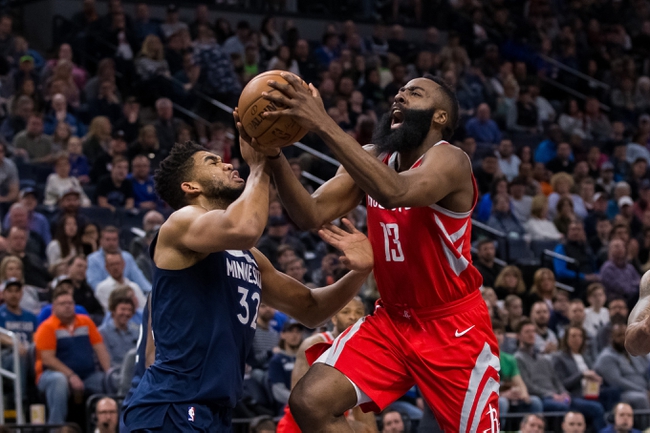 The Houston Rockets and Minnesota Timberwolves meet in the first round of the Western Conference Playoffs.

Point Guard - Jeff Teague does a great job of running the point for the Timberwolves and is a more consistent shooter from deep this season. However, Chris Paul is still probably the best pure point guard in terms of basketball IQ and taking advantage of the defense’s weaknesses. There’s not too many point guards who have a clear edge over CP3.

Shooting Guard - I love me some Jimmy Butler, and his play in this series will determine if the Timberwolves have a chance to make things competitive. The problem is James Harden is on the other side, probably the league’s MVP and somebody who is impossible to guard down the stretch. I’ve heard playing Harden in an iso situation is the punishment for going to hell.

Small Forward - Trevor Ariza is often the forgotten man on this Rockets squad, as he’s still a solid defender and is a more than reliable outside shooter. Andrew Wiggins is shooting 43.8 percent from the field this season and 33.1 percent from deep, percentages that have to improve. You can make a case for Ariza here, but Wiggins is still the better overall player and can still hit you for 40 points when he’s really feeling it. Of course, Wiggins has to show up for Minny to hang around in any of these games.

Center - Clint Capela is key for the Rockets this season, as he gives them rim protection and gobbles up second chance points for a team that jacks it up all night. On the other side, Karl-Anthony Towns is a grown man who can takeover games when he’s motivated to play with that edge. From outside shots to dominating the point, there’s nothing Towns can’t do to opposing defenses. Hopefully we see an angry Towns in this series.

Power Forward - Most Rockets fans can’t stand Ryan Anderson, as he shoots a high percentage from three, but he struggles defensively, so he has issues making an overall impact on the game. Taj Gibson has never been a sexy player, but he’s solid defensively, controls the glass and can chip in 15 points on a good night. Gibson is that glue guy that every good team needs, doing the little things to help a team win. Anderson may see less and less minutes if PJ Tucker plays well.

Bench - The Minnesota Timberwolves have a shaky bench that has improved a little with the addition of Derrick Rose, and it helps when Tyus Jones is making plays. But overall, Minnesota’s bench lives and dies with Jamal Crawford taking charge offensively, and that’s often hit or miss with his subpar shooting percentages. The Rockets have arguably the best sixth man in the league in Eric Gordon and a guy who has reshaped his career in Gerald Green. Tucker and Nene Hilario add toughness on the defensive side and Joe Johnson is a veteran presence who still has the ability to make big shots, even if he struggled down the stretch this season.

Coach - Tom Thibodeau is a hard nosed coach who you either love or hate. Either way he rides his key players into the ground and usually doesn’t get much out of them in the playoffs. The Timberwolves are also rough defensively this season, something you don’t usually see from Thibodeau coached teams. Mike D'Antoni is an offensive genius who has his best team ever coached, and he’s certainly making the most of it. While the Rockets are different from the Phoenix Suns in the past, people are still going to question if his system can produce a championship. Time will tell.

Overall - Rockets in 5 (I’ll give the Timberwolves a game based on top tier talent. Butler, Towns and Wiggins are capable of going off to get one victory. But the lack of defense and depth kills them against the Rockets. The Houston Rockets have been a buzzsaw all season.)