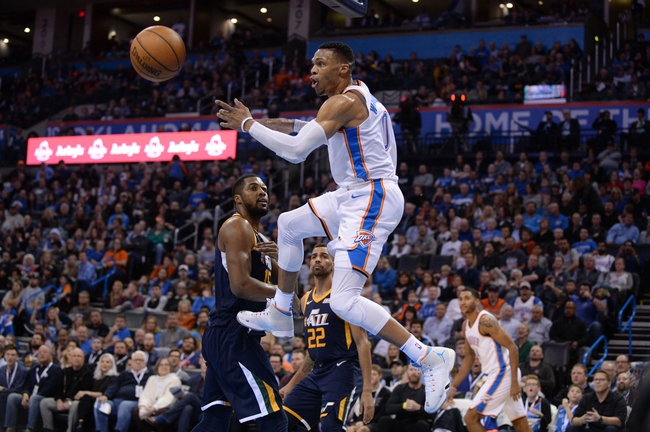 The Oklahoma City Thunder and Utah Jazz meet in the first round of the Western Conference Playoffs.

Point Guard - Ricky Rubio is having possibly the best season of his career, as he’s getting his teammates involved, playing with confidence and shooting the best he ever has beyond the arc. You can do worse than Rubio running the show, but he’s not Russell Westbrook. Yes, Westbrook can be wild at times and make poor decisions, but the guy plays his tail off and will have his fingerprints on the game win or lose.

Shooting Guard - Corey Brewer is a nice replacement for Andre Roberson, as he’s an energetic player who helps push the pace, fights for rebounds and can get easy buckets driving to the cup. Donovan Mitchell is a downright stud and deserves to be rookie of the year. I bought all the stock I can on the kid, and he’s a joy to watch. You rarely see guys this young emerge so quickly. He’s a true problem.

Small Forward - Joe Ingles is shooting 44 percent from deep for the second straight season and is averaging nearly five assists per game. Ingles makes good decisions and can takeover a quarter or two from three. Paul George is one of the best two-way players in the league and usually takes his game to another level come playoff time. It’s hard to say another small forward has a clear edge of PG13, especially when he’s playing motivated basketball.

Center - I love me some Steven Adams, as he goes out there, gobbles up rebounds, defends well, rim protects and never complains about anything. You can make a case Adams is the second most important player on OKC behind Westbrook. Rudy Gobert is possibly the best post defender in the league and a walking double-double. I don’t think it’s a coincidence the Jazz are 30-8 since Gobert returned from injury back in January.

Power Forward - Carmelo Anthony is shooting just 40.4 percent from the field this season and misses a ton of wide open threes. Maybe playoff Carmelo is better, and if that’s the case, OKC has a chance to make a serious run in the West, but as of right now, he’s a shell of himself. Derrick Favors is having his most efficient offensive season of his career and is grabbing over seven rebounds in just 28 minutes of action. If the real Melo shows up, the Thunder have the edge here, but I don’t like what I’ve seen from the 33-year-old this season.

Bench - Jerami Grant is an athletic player who does a solid job on the glass and can be good offensively, but that part of his game is still inconsistent. Raymond Felton has done an OK job of running the backup point, as he takes care of the ball and is shooting 35.4 percent from the three. Jae Crowder is a physical presence who fits in well with what the Jazz do, and he sometimes has one of those games where he explodes and can’t miss. Jonas Jerebko is shooting much better everywhere than he did those two years in Boston, and he helps spread the floor for the second unit.

Coach - I’m not sold on Billy Donovan, as he still makes boneheaded lineup choices and has moments where PG13, Westbrook and Melo aren’t on the court. That simply shouldn’t be the case. You sometimes wonder if OKC’s success is based simply off the talent getting it done rather than the coaching. Quin Snyder has won a combined 99 regular season games the last two years with the Jazz and took a team nobody was high on after Gordan Hayward left, and made them the best second half team in the league.

Overall - Thunder in 7 (I love what the Jazz do defensively, and they’re capable of stealing this series in six. However, I give OKC the edge because of the overall top tier talent and home court. Westbrook can break this defense down playing at 100 miles per hour, and Melo should wake up now that he’s in the playoffs for the first time in 30 years. OKC also has a college like crowd come playoff time, and it’s not easy to win there.)