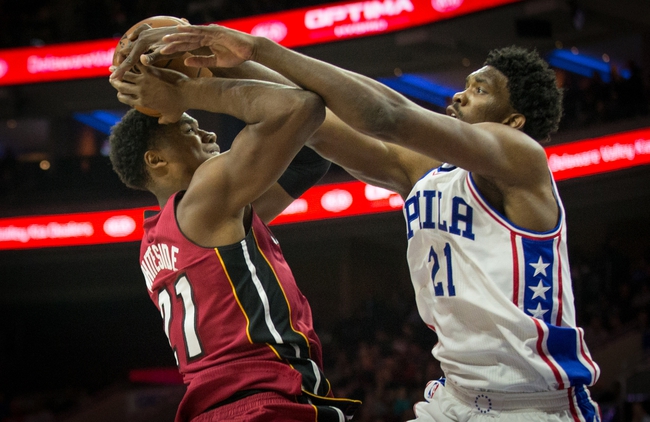 The Philadelphia 76ers and Miami Heat meet in the first round of the Eastern Conference Playoffs.

Point Guard - Ben Simmons it the better player overall than Goran Dragic, and he has a much higher ceiling obviously. Nobody is arguing that. However, we don’t know how Simmons is going to handle the pressure of playoff games. It’s different, and Dragic has been in big games overseas and has 30 playoff games under his belt. I’m not saying Dragic is the better player, but I give him the edge at his position for this series.

Shooting Guard - It’s going to be interesting to see if Dwyane Wade moves to the starting lineup at some point. For now, this is a matchup between Tyler Johnson and JJ Redick. I like Johnson’s toughness, and he’s improved his shot from last year, but Redick is the model of consistency and is still a shooter who can put up double-digit points in a quarter. Don’t be surprised if Wade starts at some point this series.

Small Forward - Robert Covington is the most under appreciated player on the 76ers, as he shoots well from deep, sets his teammates up well and rebounds well for his position. Josh Richardson has bumped his scoring average to 13 per game this season and makes a strong case for being an all-NBA defender. If you’re not familiar with Richardson, you will be after this series. At on 24 years old, Richardson is quickly blossoming into one of the faces of the Heat franchise and somebody who could make some all-star teams in the near future.

Center - The matchup of the series, as Joel Embiid and Hassan Whiteside don’t seem to like one another and usually get into it often. Embiid is questionable due to an eye injury, but I expect him to wear a mask and play at some point. The one time Whiteside plays with passion is when he plays the 76ers, as he can be lackluster at times. Whiteside is the better post presence, but Embiid is obviously the better all around player and his ability to stretch the floor gives Miami problems.

Power Forward - Both Dario Saric and Kelly Olynyk do similar things on the court, as they pass well, can hit the deep ball and finish around the rim. Saric is the more consistent long range shooter, but Olynyk has grown on me the last couple of months and is starting to really thrive in his role with his new team. Overall, I think the play of these two will cancel each other out. Both will hit big shots and struggle to keep the other in check.

Bench - Marco Belinelli was a big mid-size addition for the 76ers, and he’s averaging nearly 14 points on 50 percent shooting. T.J. McConnell is an energy spark at backup point guard, Ersan Ilyasova is a capable double-digit scorer and Markelle Fultz has shown flashes since his return from injury. The Heat have Wayne Ellington, who set an NBA record for most threes made off the bench. James Johnson is a physical defender who does the dirty work and can chip in double-digit points when he’s hot. Justise Winslow is getting more comfortable offensively and remains a stout defender, while Bam Adebayo is a rookie center who defend all five positions and finishes nicely around the rim. Really close to a draw, but the Heat’s depth is why they’re in the playoffs. We can’t say the same for the 76ers, who rely more on their starting unit.

Coach - Brett Brown has proven himself as an NBA coach and should be given consideration for coach of the year. However, most will tell you Erik Spoelstra is one of the top coaches in the league, and when I say that, I’m talking about top five. Spoelstra may be stubborn with his lineup decisions, but he’s not afraid to make unpopular decisions and is one of the best when it comes to drawing up plays out of a timeout. Spoelstra is one of the main reasons many respect the Heat and are never quick to count them out in a series. Elite coaches make the world of difference, and Spoelstra is in that conversation. Brown on the other hand will be making his playoff debut.

Overall - Heat in 6 (While the 76ers are more talented and come into this series red hot, we have to remember they’re still babies. Playoffs are a different atmosphere, and the Heat have experienced roughriders who defend well and are playing some of their best offense in years. Miami also has the coaching advantage, which is key in long series. Give me the upset.)