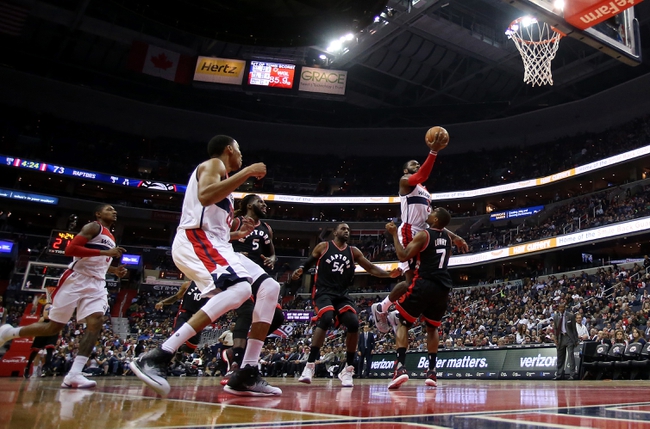 The Toronto Raptors and Washington Wizards meet in the first round of the Eastern Conference Playoffs.

Point Guard - A lot of this has to do with the health of John Wall, as he missed majority of the season due to injury and doesn’t quite have his feet under him. However, Kyle Lowry has a history of folding in the playoffs, so there’s question marks there as well. A healthy Wall is better than a healthy Lowry, and he’s the engine to this Washington squad.

Shooting Guard - Bradley Beal comes and goes most of the time. Sometimes he’ll kill you from deep and drop 30 points, other nights you’ll forget he’s even on the court. DeMar DeRozan is coming off possibly the best season of his career and a huge reason Toronto is where it is currently.

Small Forward - OG Anunoby is an energetic player who does well with the minutes he gets, but Otto Porter Jr. has been really consistent this season and quieting the doubters who said he wasn’t worth his new contract. Porter is blossoming into a borderline all-star caliber player and will be key if Washington has any chance in this series.

Center - Marcin Gortat is good for what he is, as he’s been a decent player for a decade now and provides a veteran presence in the paint. However, Jonas Valanciunas is the more physical player and more of what you want from the center position. Valanciunas takes advantage of finesse players, and that’s what he’s going up against in this series.

Power Forward - Serge Ibaka and Markieff Morris have both enjoyed possibly the best season of their careers and deserve more credit for their teams success. Ibaka is shooting 48.5 percent from the field and Morris is killing teams, shooting nearly 37 percent from deep. I’ve been impressed with both of these guys this season, which is why I can’t call a clear advantage at this spot.

Bench - The Wizards lack of depth has been an issue for years, as Kelly Oubre Jr. is the only guy you can consistently count on from the second unit for Washington. The Raptors have a double-digit scorer in CJ Miles off their bench, while Fred VanVleet, Delon Wright and Jakob Poeltl all play meaningful minutes. The Raptors depth is the reason they’ve gone from a cool team in the East to possibly the frontrunners to make the NBA Finals.

Coach - Scott Brooks has been in the NBA Finals before and has only missed the playoffs twice in his career. Dwane Casey is likely the NBA coach of the year this season and has topped 50 wins in each of the last three years. Casey seems to have a better feel of his roster than Brooks, and gets more out of players you’d least expect. Brooks runs the same stuff over and over, and if his core of three or four players don’t produce, the Wizards sink. There’s more trust with Casey on the sidelines than in the past.

Overall - Toronto Raptors in 5 (I’m not high on these Wizards at all, and think they’re the worst playoff team out of all 16 teams.)