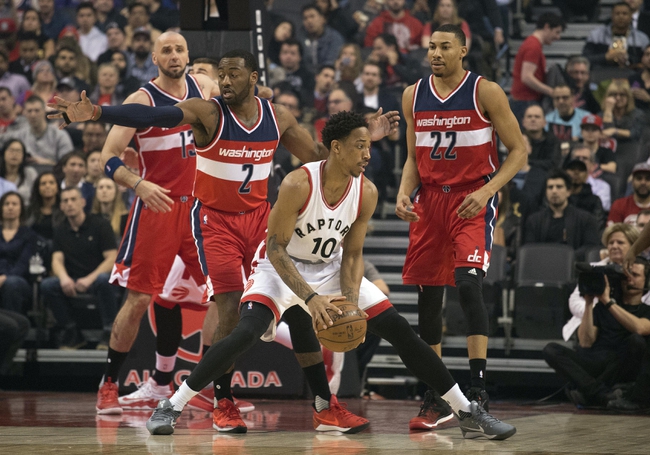 The Washington Wizards pay a visit to the Air Canada Centre to battle the Toronto Raptors in Game 1 of the NBA Playoffs on Saturday.

The Washington Wizards started the season strong but they practically limped their way into the playoffs as they lost nine of their last 12 games of the regular season to finish with a record of 43-39 which is good enough to earn them the eighth seed in the Eastern Conference. Bradley Beal had himself a solid season with averages of 22.6 points, 4.4 rebounds and 4.5 assists per game while playing all 82 games, John Wall averaged 19.4 points and 9.6 assists but injuries restricted him to just 41 games this season while Otto Porter Jr. finished the season with averages of 14.7 points and 6.4 rebounds per game. As a team, the Wizards averaged 106.6 points per game while shooting 37.5 percent from three-point range.

Meanwhile, the Toronto Raptors will be feeling pumped for these playoffs as they won 18 of their last 24 games to finish with a 59-23 record and the number one seed in the Eastern Conference. DeMar DeRozan was a rock for the Raptors as he averaged 23 points, 3.9 rebounds and 5.2 assists per game, Kyle Lowry averaged 16.2 points, 5.6 rebounds and 6.9 assists while Jonas Valanciunas averaged 12.7 points and 8.6 rebounds per game. The real strength of the Raptors this season has been their depth and it has been role players like CJ Miles, Fred VanVleet, OG Anunoby and Jakob Poeltl who have been the driving force for the second unit this season. As a team, the Raptors averaged 111.7 points per game, 44 rebounds per game while shooting 35.8 percent from the three-point line.

These two teams met in four close games in the regular season as each game was decided by an average of 7.5 points so we could be in for a long series. With that being said, the Raptors are deserved favorites as they are clearly the team in better shape but for whatever reason, they are just 1-11 all-time in playoff Game 1s and have lost each of their last nine. I do think the Raptors snap out of that streak with a win here, but I’m taking the Wizards with the points in what should be a close game.