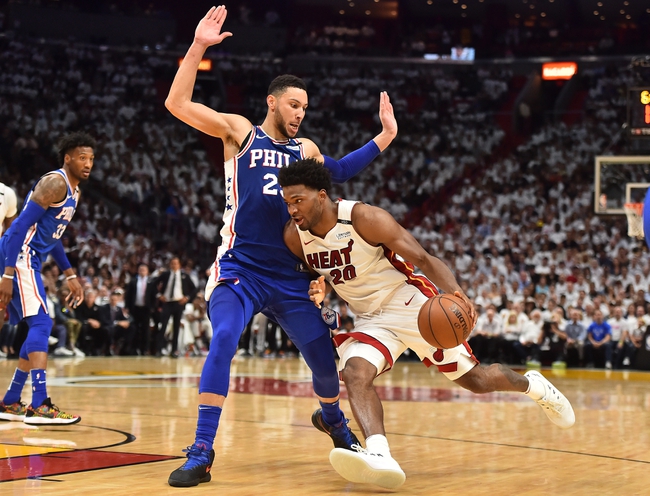 The Philadelphia 76ers will be aiming to take a commanding 3-1 series lead against the Miami Heat at the American Airlines Arena on Saturday.

The Philadelphia 76ers will be looking to move one step closer to advancing after beating the Heat by 128-108 in Game 3 to take a 2-1 series lead on Thursday. Joel Embiid returned to the starting lineup to lead the team with 23 points, seven rebounds, four assists and three blocks, Dario Saric and Marco Belinelli each scored 21 points while Ben Simmons racked up 19 points with 12 rebounds and seven assists. As a team, the 76ers shot 50 percent from the field and 18 of 34 from the three-point line but this game was closely contested all the way until the fourth quarter where the 76ers outscored the Heat by an impressive 32-14 to run away with the game late. Overall, it was a great win for the 76ers who will be full of confidence now that they’re back at full strength.

Meanwhile, the Miami Heat looked great in their win in Game 2 and they looked primed to take a make it two straight wins before falling flat on their faces in the fourth quarter of Game 3. Goran Dragic led the team with 23 points and eight assists, Justise Winslow added 19 points with 10 rebounds, Josh Richardson chipped in with 14 points while James Johnson finished with 12 points, seven rebounds and five assists. As a team, the Heat shot 45 percent from the field and an impressive 16 of 33 from the three-point line but they could never find their footing in the game with Hassan Whiteside finishing with just five points while Dwayne Wade shot just two of 10 from the field.

The 76ers were able to regain control of the series with a hard-fought, physical win in Game 3 to take a 2-1 series lead, but the Heat certainly aren’t out of it as a win here would level the series and put the pressure back on the young 76ers. The Heat have their backs against the wall so I’m expecting them to come out firing in this one, but the 76ers are a different team with Embiid back on the court and they're a solid 5-1 ATS in their last six road games and 13-4 ATS in their last 17 games overall. Look for those trends to continue as the 76ers take improve on their lead in the series.