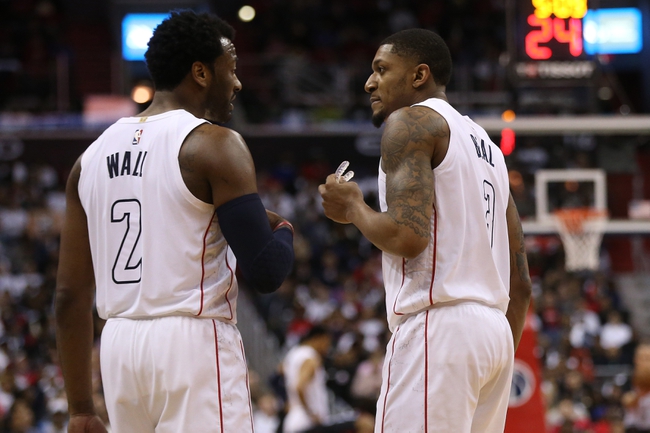 The Washington Wizards will be aiming to square the series as they host the Toronto Raptors at the Verizon Center in Game 4 on Sunday.

The Washington Wizards really looked completely outmatched at times during the first two games of the series but they took a stand with an impressive 122-103 home win in Game 3. It was the usual suspects leading the way for the Wizards as John Wall scored 28 points with 14 assists and four steals while Bradley Beal added 28 points on 10 of 19 shooting. Marcin Gortat added 16 points on eight of 10 shooting while Mike Scott and Kelly Oubre Jr. each finished with 12 points off the bench. As a team, the Wizards shot a healthy 55 percent from the field and 10 of 23 from the three-point line as they relied heavily on the scoring of Wall and Beal who delivered right when the series looked to be in danger. However, the Wizards deserve a lot of credit for their defense as they really got into the passing lanes and forced 19 turnovers leading to 28 points.

Meanwhile, the Toronto Raptors couldn’t have been much happier after the way the first two games of the series turned out, but their role players just didn’t show up and it cost them Game 3. DeMar DeRozan led the team with 23 points on 10 of 22 shooting, Kyle Lowry drained five 3-pointers to finish with 19 points and eight assists while Jonas Valanciunas chipped in with 14 points but no bench player scored more than CJ Miles who finished with just nine points. As a team, the Raptors shot 45 percent from the field and 12 of 28 from the three-point line but they didn’t take care of the ball and were generally outhustled by the Wizards who were clearly the more focused team on the night. Fred VanVleet was out again because of a bruised right shoulder and is currently listed as day to day.

The Wizards lost by double digits in the first two games but will be feeling pretty good after pouring in 101 points in the first three quarters to set up the win they had to get. It’s up to the Raptors to respond now and I’m sure they’ll be better, but they’ve been an average road team this season and are just 1-6 ATS in their last seven road games. The Wizards are 4-1 ATS in their last five home games and I had this series going to seven games, so I’m taking the Wizards to square the series in a close one.