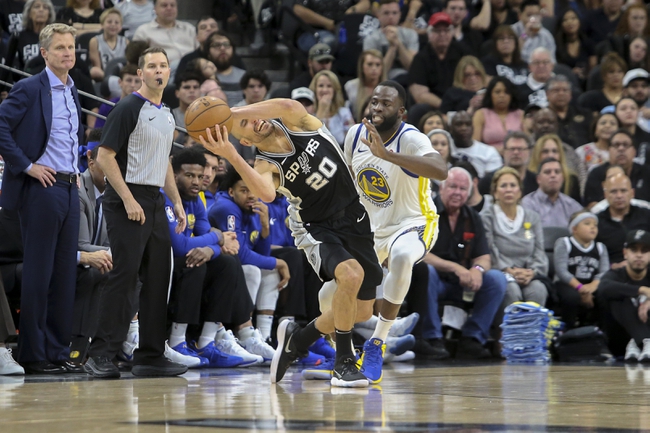 The San Antonio Spurs and the Golden State Warriors duke it out in Game 5 at the Oracle Arena in Game 5 on Tuesday night.

The San Antonio Spurs were able to stave off elimination with a hard-fought 103-90 win over the Warriors in Game 4 on Sunday. LaMarcus Aldridge led the team with 22 points and 10 rebounds, Rudy Gay added 14 points while Dejounte Murray chipped in with 12 points. As a team, the Spurs shot 45 percent from the field and a healthy 15 of 28 from the three-point line as they jumped out to lead by as many as 17 points early on before the Warriors cut the lead to just four. Fortunately, the Spurs still have the 40-year old Manu Ginobili who carried the team over the line with 10 points in the fourth quarter to finish with 16 points and five assists for the game.

Meanwhile, the Golden State Warriors had a chance to complete the sweep and advance to the second round but they came out flat against the Spurs in the first half and found themselves fighting an uphill battle the rest of the way. Kevin Durant led the team with 34 points and 13 rebounds, Klay Thompson added just 12 points while Shaun Livingston chipped in with 10 points but no other player finished in double figures. Draymond Green did finished with nine points, 18 rebounds and nine assists, but the Warriors were poor on the offensive end as they shot just 37 percent from the field and seven of 28 from the three-point line while committing 16 turnovers.

The Spurs were able to put it all together in an impressive win in Game 4 to keep their season alive but it’s hard to get too excited because they almost lost despite leading by as many as 17 points. The Warriors didn’t match the Spurs’ intensity in the first half and it cost them the game so I’m expecting them to bounce back, especially Thompson who shot just four of 16 from the field. The home team is 9-2 ATS in the last 11 meetings and the Spurs are 0-9 ATS in their last nine road games, so I’m going with the Warriors to clinch the series with a big win at home.