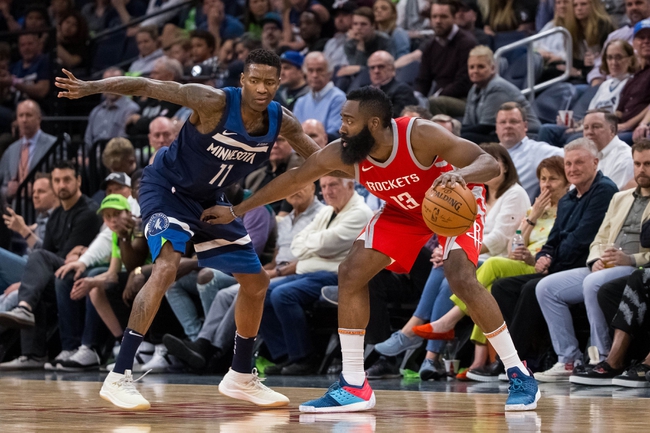 The Minnesota Timberwolves travel to the Toyota Center to battle the Houston Rockets in Game 5 on Wednesday night.

The Minnesota Timberwolves will still be scratching their heads after what happened to them in their 119-100 loss in Game 4. Karl-Anthony Towns did a great job of asserting himself on the offensive end as he finished with 22 points and 15 rebounds, Jimmy Butler added 19 points with nine rebounds and five assists while Andrew Wiggins chipped in with 14 points. As a team, the Timberwolves shot 46 percent from the field and they were right there with the Rockets until things unravelled in the third quarter where the Rockets just couldn’t miss. The Timberwolves need more production from Jeff Teague who finished with just two points on one of seven shooting because they’re already getting all they can from Derrick Rose who finished with 17 points and four assists off the bench.

Meanwhile, the Houston Rockets will be looking to close out the series at home after blowing past the Timberwolves to take a 3-1 series lead in Game 4 on Monday. James Harden led the way with 36 points on 12 of 26 shooting, Chris Paul added 25 points with six assists while Eric Gordon provided the spark off the bench with 18 points. As a team, the Rockets shot just 43 percent from the field but they connected on 16 of 43 from the three-point line and they just couldn’t miss in third quarter where they outscored the Timberwolves by an amazing 50-20 to put the game out of reach early. Defensively, the Rockets did a great job of pressuring the Timberwolves for the first three quarters of the game and they really took care of the ball, finishing with just six turnovers.

The Rockets are now just one win away from advancing to the second round and they must be feeling pretty good after that amazing 50-point third quarter, so it’s no surprise they’re heavy favorites again. The Timberwolves played much better at home and they will be quietly confident given how close they were to squaring the series at 2-2, but they’ve been a disappointing road team all season and I think that comes back to bite them again. Give me the Rockets to move onto the second round with a big win at home in this one.