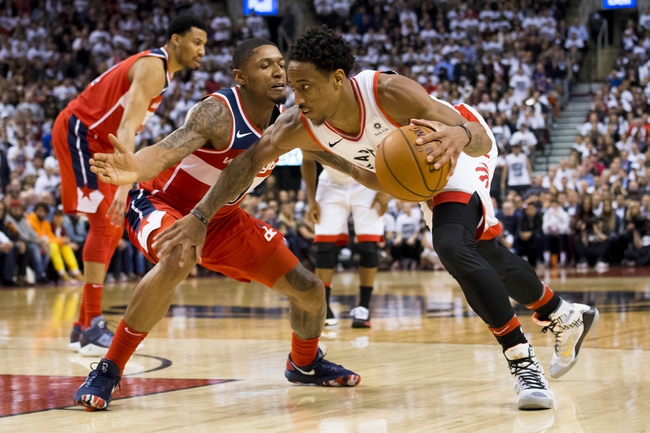 The Toronto Raptors look to advance to the second round as they battle the Washington Wizards at the Capital One Arena in Game 6.

The Toronto Raptors will be aiming to close out the series and move onto the next round after taking down the Wizards by 108-98 in Game 5 to take a 3-2 series lead. DeMar DeRozan led the team with 32 points with five assists, Delon Wright added 18 points off the bench, Kyle Lowry scored 17 points with 10 assists while Jonas Valanciunas chipped in with 14 points and 13 rebounds. As a team, the Raptors shot 46 percent from the field and 11 of 25 from the three-point line but in a close contest, the Raptors couldn’t get any separation until late in the fourth quarter where they closed the game on a 16-7 run sparked by nine points from Wright. Defensively, the Raptors did a great job overall except on the boards where they were outrebounded by 50-35.

Meanwhile, the Washington Wizards would have thought that they were in control of the series after back-to-back wins at home, but they’re now in danger of getting eliminated after letting one slip in Game 5. John Wall led the team with 26 points, nine rebounds and nine assists, Bradley Beal added 20 points with three assists, Kelly Oubre Jr. scored 14 points off the bench while Marcin Gortat chipped in with 10 points and 12 rebounds. As a team, the Wizards shot just 41 percent from the field and a miserable five of 26 from the three-point line but they were actually leading by five points early in the fourth quarter before the Raptors pulled away late. The Wizards need more production from Markieff Morris and Otto Porter Jr who combined for just 15 points but overall, they won’t be too disappointed with their play as they were right in the contest for about 46 minutes of the game.

The home team has won every game so far, but I wouldn't be surprised at all if the Raptors changed that with a series-clinching win here. However, the Wizards are battling for their playoff lives, they're playing at home where they've already won twice in this series and they were neck and neck with the Raptors in Game 5 until late in the fourth quarter. The home team is a perfect 5-0 ATS in the last five meetings and I think that trend continues as this series is heading to a Game 7.