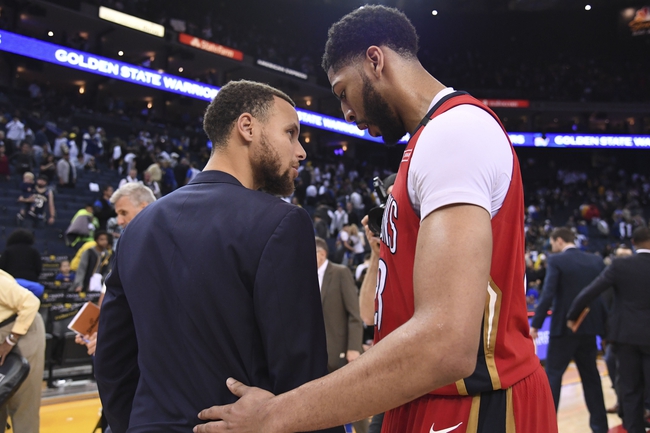 The New Orleans Pelicans and Golden State Warriors meet in the second round of the Western Conference Playoffs.

Point Guard - This obviously comes down to whether or not Steph Curry is going to play. It seems like everyday there’s a new report. Some say he’s practicing and is close to returning, while others say he’s still in danger of missing time. I guess time will tell. For now, you have to give the edge to the Pelicans. In four games, Rajon Rondo is averaging 13.3 assists, 7.5 rebounds and shooting 48.7 percent from the field. Rondo gives New Orleans a much needed spark, something 34-year-old Andre Iguodala can’t do in replace of Curry.

Shooting Guard - Jrue Holiday may have been the player of the field round, as he averaged 27.8 points, 6.5 assists, shot 56.8 percent from the field and locked up Damian Lillard. I’ll say it now; if Holiday plays like that in this series, the Pelicans have a terrific chance of making the Western Conference Finals. With Klay Thompson there’s more proof he’ll show up on the big stage, as he consistently lights you up offensively and can still defend the other teams best scorer for long stretches. Because of a larger sample size, you have to give the Warriors the edge.

Small Forward - E'Twaun Moore played better this season than what he did in the playoffs, so expect a better showing from him here. Regardless, Moore is not Kevin Durant, one of the top-five players in the NBA and more than capable of carrying the Warriors until Curry returns. This is a clear edge for the Warriors.

Center - JaVale McGee is a great fit for the Warriors, as he just has to bring energy, get rebounds and be ready for the lobs and easy put backs. Don’t do too much or anything out of your game. McGee went from being a laughing stock on highlight clips to being a pretty productive player on a championship team. Respect. With that said, Anthony Davis is one of the best players in the league and is playing out of this world at the moment. If Curry returns or not, AD in his current form is the main reason some think the Pelicans are going to give the Warriors a run. Davis is dominating at both ends and making it look easy.

Power Forward - In the playoff sweep over Portland, Nikola Mirotic shot 57.1 percent from the field, 46.2 percent from three and averaged 18.3 points and 9.5 rebounds. Everybody knows Mirotic can shoot, but that playoff series may have been the best stretch of basketball we’ve seen from the former Chicago Bull. Draymond Green is obviously one of the top defenders in the league and does things for Golden State that nobody can replace. The problem is Green isn’t the same player without Curry on the court, as his offensive responsibilities increase, and he’s simply not the type of shooter that scares you. I’ll give Golden State the edge, but it’s closer than most people would think.

Bench - Both of these teams played their starters a ton in the first round, and neither has a bench player that makes the world of difference. Shaun Livingston is a consistent vet who can chip in double digit points here in there and Quinn Cook has done a fine job in increased minutes with the Curry injury. But other than that, it’s a bunch of guys who get spot minutes. Ian Clark, Jordan Crawford, Darius Miller and Solomon Hill all averaged at least 4.3 points in the first round playoff series. However, Clark is the only guy you can count on night in and night out, and he should be excited for this series against his former team. Either way, the benches are a wash to me, as the starters will clog up the minutes, and this series is mainly about the stars and if New Orleans can get similar production out of their core.

Coach - Alvin Gentry proved his worth in the series sweep against Portland. We knew Gentry was a bright offensive mind who will get his guys in position to score triple digits nightly, but he threw many defensive looks out there and confused the hell out of Lillard and C.J. McCollum. The Pelicans shutdown one of the best backcourts in the league in ways you don’t see. He’ll also have a key advantage considering he was an assistant on this Warriors staff and should have some tricks up his sleeve to counter what the Warriors like to run. Still, Steve Kerr has quickly established himself as one of the top coaches in the league. Gentry has my attention, which wasn’t the case two weeks ago, but Kerr still has the edge.

Overall - Warriors in 6 (I’m not afraid to pick upsets and really want to side with the Pelicans, but Curry is likely going to come back at some point this series, and there’s just too much firepower for the Pelicans to counter. Golden State has more bodies to throw at this New Orleans offense and is a much tougher defensive matchup for the Pelicans, who only had to worry about two guys against Portland. I’ll give New Orleans two games and wouldn’t be shocked at an upset if Curry doesn’t return. But assuming Curry is ready to go, the Warriors should win this series, albeit longer than they want)