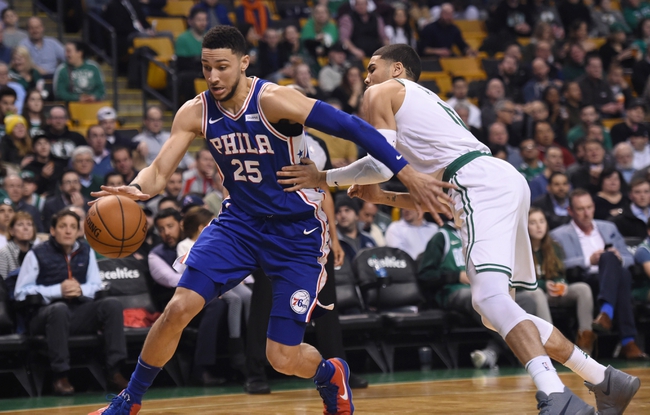 The Philadelphia 76ers and the Boston Celtics collide in Game 1 of the Eastern Conference Semifinals at the TD Garden on Monday night.

The Philadelphia 76ers were the hottest team going into the playoffs and they just went from strength to strength as they blew past the Heat in a 4-1 series with three double-digit wins. Joel Embiid sat out the first two games of the series with that orbital fracture but he returned in Game 3 and averaged 18.7 points, 10.3 rebounds and 3.0 blocks for the series, Ben Simmons was sensational as he averaged 18.2 points, 10.6 rebounds and 9.0 assists, while players like JJ Redick, Marco Belinelli and Ersan Ilyasova played quality minutes. Overall, the 76ers probably couldn’t be happier with their performances so far and they looked primed for a deep run as all the pieces seem to be working right now.

Meanwhile, the Boston Celtics will be feeling pretty pumped after stayed undefeated at home to sneak past the Bucks in a 4-3 series win on Saturday. Al Horford was probably the most reliable contributor as he finished with averages of 18.1 points, 8.7 rebounds and 3.3 assists per game, Jaylen Brown averaged 17.9 points, Terry Rozier averaged 17.6 points and 6.7 assists while Jayson Tatum averaged 15.4 points. As a team, the Celtics won’t be too happy that they weren’t able to snag a road win, but they finished the series with a bang as they blew out the Bucks by 16 points in Game 7 to finish on a high.

These two teams met four times in the regular season and it was the Celtics who won the first three meetings by double-digits before the 76ers beat them by 89-80 in their own building on Jan 18. Since they’ve last met, the Celtics have stayed solid but this was when we started to see the 76ers really take off. The betting trends favor the 76ers who are 6-1 ATS in their last seven road games overall and 4-1 ATS in the last five meetings in Boston, so I’m sticking with the well-rested 76ers to stay hot with a win here.