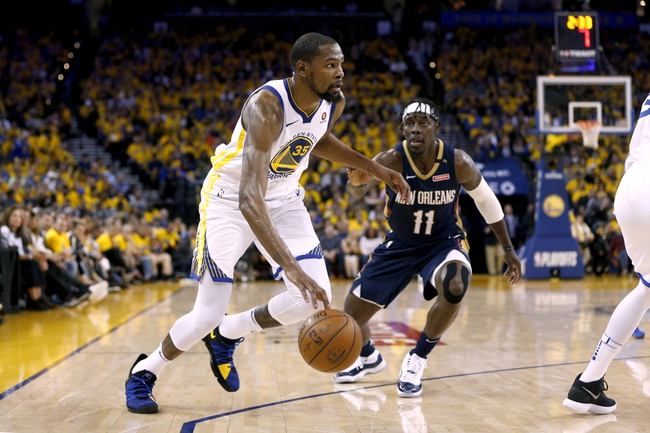 The Golden State Warriors play host to the New Orleans Pelicans in Game 2 of the Western Conference Semifinals at the Oracle Arena on Tuesday.

The New Orleans Pelicans played great basketball to sweep the Trailblazers in the first round of the playoffs, but they fell back to earth with a 123-101 loss to the Warriors in Game 1 on Saturday. Anthony Davis got it going early but finished with just 21 points and 10 rebounds, E’Twaun Moore added 15 points, Jordan Crawford added 14 points while Rajon Rondo chipped in with nine points, eight rebounds and 11 assists. As a team, the Pelicans shot just 43 percent from the field and eight of 25 from the three-point line but there was just no coming back as they trailed by as many as 30 points late in the third quarter.

Meanwhile, the Golden State Warriors   Klay Thompson led the team in scoring with 27 points on 10 of 22 shooting, Kevin Durant added 26 points with 13 rebounds while Draymond Green racked up a triple-double of 16 points with 15 rebounds, 11 assists, three steals and two blocks. As a team, the Warriors shot 48 percent from the field and 11 of 27 from the three-point line but after a tightly contested first quarter, the Warriors took over the game with a ferocious 25-2 run in the second quarter to put the game out of reach before halftime. Stephen Curry sat out the game with that knee injury but the news is that he is very likely to suit up for Game 2 which would push Nick Young back to the bench.

Perhaps it was the long layoff or maybe the Warriors were playing great defense, but the Pelicans didn’t quite look like themselves from the second quarter onwards in Game 1. There were just way too many missed defensive assignments allowing Warriors players to get loose for uncontested shots in the paint and I worry that it could only get worse with Curry likely to return to the lineup. I like the Warriors to go up 2-0 in the series but I think we’re going to get a much better performance from the Pelicans and in particular, Jrue Holiday who scored just 11 points no Saturday.