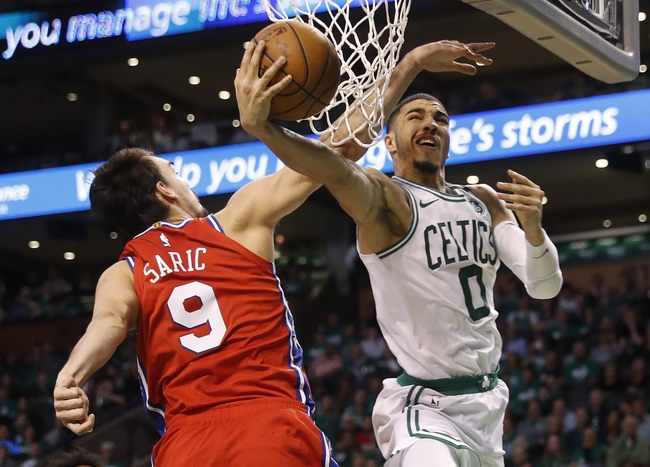 The Boston Celtics and the Philadelphia 76ers collide in a crucial Game 2 at the TD Garden on Thursday night.

The Philadelphia 76ers have been one of the hottest teams in the league over the last three months and coming off the long layoff, they opened as slight favorites on the road. However, things didn’t quite go to plan as they were thoroughly outplayed by the Celtics in a 117-101 loss in Game 1. Joel Embiid led the team with 31 points, 13 rebounds and five assists, JJ Redick added 20 points while Ben Simmons racked up 18 points, seven rebounds and six assists. As a team, the 76ers just weren’t on their game as they shot just 42 percent from the field and a miserable five of 26 from the three-point line. Marco Belinelli wasn’t too bad as he finished with 11 points, but the team needs him to lift with Robert Covington’s shooting struggles continuing.

Meanwhile, the Boston Celtics had to battle their way through a tough seven-game series against the Bucks before taking on the 76ers on a short turnaround and they couldn’t be happier as they drew first blood in the series. Terry Rozier was on fire as he drained seven 3-pointers en route to 29 points, eight rebounds and six assists, Jayson Tatum added 28 points while Al Horford added 26 points with four assists. As a team, the Celtics shot 48 percent from the field and a healthy 17 of 35 from the three-point line as they pulled away late in the second quarter to lead by as many as 17 points before the 76ers cut it to nine points, but the game was never really in doubt. Marcus Smart started in place of the injured Jaylen Brown but

I expected the 76ers to take care of business in Game 1 but perhaps the long layoff backfired on them as they weren’t nearly as sharp as they were in the first round. The game wasn’t quite as one-sided as the final score suggests and I don’t see the 76ers shooting that poorly from the three-point line again. However, the Celtics looked to have picked up right where they left off as they connected on a barrage of threes to remain undefeated at home in these playoffs. You expect this game to be much closer than Game 1, but I think this series could go seven games and the Celtics have been so good at home in these playoffs so I’m going with the C’s and the points here.