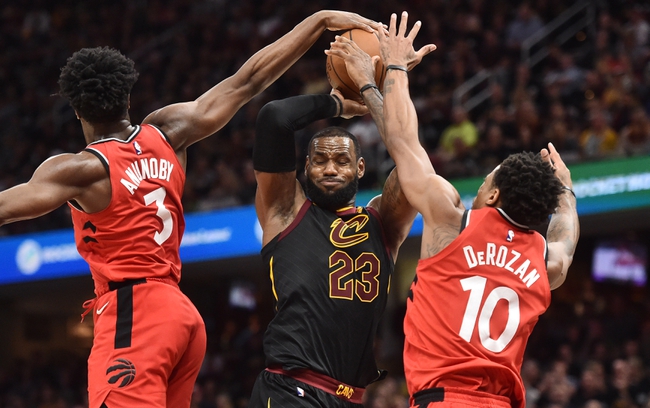 The Cleveland Cavaliers aim to complete the sweep of the Toronto Raptors in Game 4 at the Quicken Loans Arena on Monday night.

The Toronto Raptors will be hoping to stave off elimination after getting their hearts ripped out in a 105-103 loss in Game 3. Kyle Lowry looked good from the start and led the way with 27 points and seven assists on nine of 13 shooting, OG Anunoby added 18 points while CJ Miles chipped in with 13 points and a clutch three to tie it late in the game. However, the Cavaliers had LeBron James who broke their hearts with a clutch floater at the buzzer to steal the game after the Raptors rallied back from a 16-point third quarter deficit. As a team, the Raptors shot 46 percent from the field and 13 of 33 from the three-point line but they needed more from DeMar DeRozan who finished with just eight points on three of 12 shooting from the field while sitting the entire fourth quarter in a questionable move from coach Dwayne Casey.

Meanwhile, the Cleveland Cavaliers are now just one win away from advancing to the Eastern Conference Finals once and there’s no surprise who has been leading the way. LeBron James drained the game-winner at the buzzer to finish with 38 points, six rebounds and seven assists, Kevin Love got hot early and finished with 21 points and 16 rebounds while Kyle Korver drained four three-pointers to finish with 18 points. As a team, the Cavaliers shot 48 percent from the field and just nine of 25 from the three-point line but they came out strong and dominated the first half, outscoring the Raptors by 55-40 before things tightened up in the second half.

Perhaps there was an element of luck as the Raptors looked to have all the momentum late in the fourth quarter of Game 3 and one shot or missed shot could’ve changed the entire series. However, LeBron really has dominated the Raptors in the last couple playoffs and I feel that continues in this one. I think this game is close for about three quarters, but the Cavaliers in a close out game with all the momentum and playing at home should once again be too much for the Raptors who just can't buy a win.