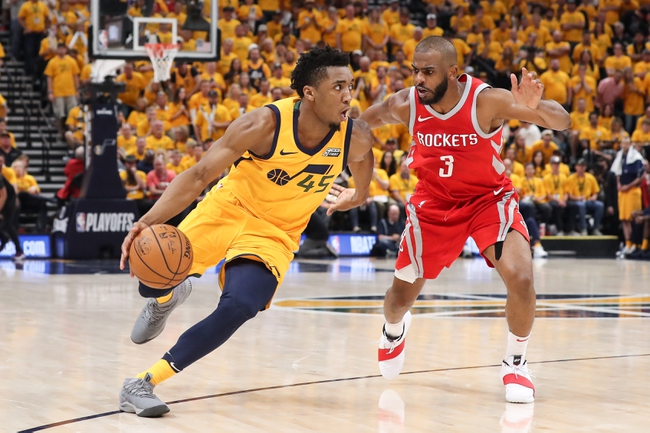 The Utah Jazz will be looking to stave off elimination as they take on the Houston Rockets at the Toyota Center in Game 5 on Tuesday.

The Utah Jazz will be aiming to keep their season alive after falling behind 3-1 in the series after Game 4’s 100-87 loss to the Rockets. Donovan Mitchell needed to bounce back after scoring just 10 points in Game 3 and he did that with 25 points before fouling out, Joe Ingles added 15 points while Rudy Gobert chipped in with 11 points, but no other players finished in double figures. As a team, the Jazz shot just 38 percent from the field and seven of 29 from the three-point line but they fell victim to a red-hot start from the Rockets and were left fighting an uphill battle after falling behind by 15 points in the second quarter. The Jazz got next to no scoring from their bench players and Jae Crowder endured a rough shooting night, making just one of 11 attempts to finish with five points. Dante Exum has been a spark off the bench for the Jazz but he left in the third quarter with a hamstring injury which puts him in doubt for Tuesday.

Meanwhile, the Houston Rockets moved to within 48 minutes of a Western Conference Final berth but they’re trying not to get too ahead of themselves given their lack of playoff success in recent seasons. Chris Paul led the way with 27 points, 12 rebounds and six assists, James Harden added 24 points while Clint Capela chipped in with 12 points, 15 rebounds and six blocks. As a team, the Rockets shot just 42 percent from the field and 10 of 38 from the three-point line but they were the faster team out of the gates which allowed them to just settle in with an early double-digit lead.

After getting blown out in Game 3, the Jazz needed to come out firing to level the series on Sunday but they were slow out of the gates and it cost them. Defensively, the Jazz did a nice job of limiting Harden but they had no answer for Paul who was clearly looking for his shot more often, rather than kicking it to the open shooter. With the season now on the line, the Jazz will surely come out with firing but the Rockets have been waiting for a chance to redeem themselves in these playoffs after choking in recent seasons and I just don’t see Harden and Paul messing this one up at home. I think the Rockets pull away late and move onto the next round against the shorthanded Jazz in this one.