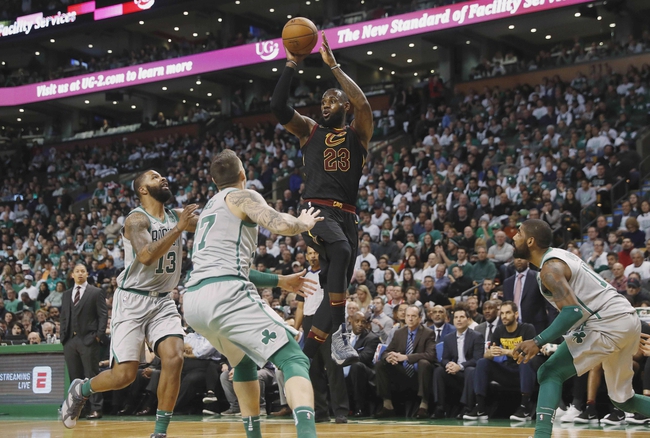 The Cleveland Cavaliers and the Boston Celtics collide in Game 1 of the Eastern Conference Finals at the TD Garden on Sunday.

The Cleveland Cavaliers would’ve had plenty of doubters after they barely escaped the Pacers in a seven-game series in the first round, but they were able to go to another gear in a clean sweep of the Raptors in the Eastern Conference Semifinals. LeBron James led the way with averages of 34.0 points, 8.3 rebounds and 11.3 assists per game, Kevin Love really lifted his production in the last three games to finish with averages of 20.5 points and 11.5 rebounds while role players like JR Smith, Kyle Korver and even Tristan Thompson have been contributing. Overall, the Cavaliers will be delighted that they were able take care of business in four games as it allows them plenty of rest after a long seven-game series which is particularly important for James who has been playing heavy minutes in these playoffs.

Meanwhile, the Boston Celtics have been on a similar path to the Cavaliers as they had to battle through a tough seven-game series against the Bucks in the first round before blowing past the 76ers in a five-game series in the second round. Terry Rozier was the spark plug for them as he finished with averages of 19.0 points, 7.2 rebounds and 4.4 assists, Jayson Tatum led the team in scoring against the 76ers with averages of 23.6 points while Al Horford averaged 15.4 points, 8.6 rebounds and 3.4 assists per game but it was truly a team effort as the unsung heroes like Marcus Smart and Aron Baynes contributed during the series.

The Celtics lost two of three meetings against the Cavaliers during the regular season but both teams are so hot right now that I see this one going down to the wire. LeBron is going to put up monster numbers as the Celtics don’t quite have the bodies to contain him, but they’ve won all seven of their home games in these playoffs as the crowd really does seem to give them a lift during crunch time. The Celtics have a major matchup problem as there's no one player who can guard him but they'll make sure to run the Cavaliers' shooters off the line and attempt to make them pay on misses. The Celtics are a solid 13-3 ATS in their last 16 home games and they’re really playing so well as a team on both ends of the floor, so I’m taking them to draw first blood in the series with a narrow win in this one.

The pick in this article is the opinion of the writer, not a Sports Chat Place site consensus.
Previous Pick
Boston Celtics vs. Philadelphia 76ers - 5/9/18 NBA Pick, Odds, and Prediction
Next Pick
2018 NBA Eastern Conference Finals: Position-By-Position Breakdown Of Cleveland Cavaliers-Boston Celtics