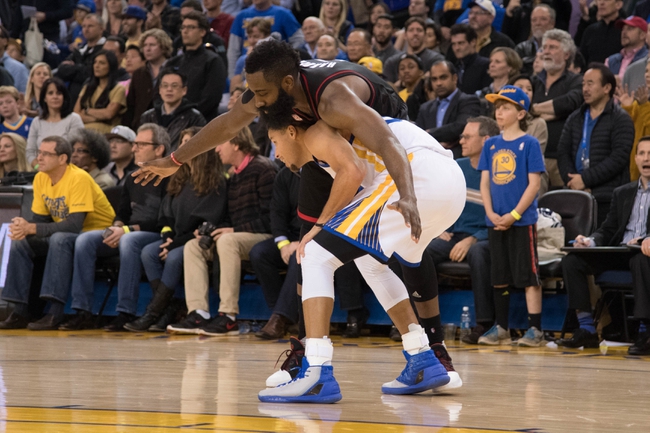 Point Guard - Stephen Curry is the greatest shooter of all time and is hitting 47.8 percent from the field and 44.1 percent from three in four playoff games. There’s probably not another player in the league you fear more crossing half court with the ball in his hands. The dude can pull up from anywhere and make five or six in a row in an instant. Chris Paul has balled out these playoffs and took over in the fourth quarter of game five against the Jazz. You can tell just how badly CP3 wants this. Chris Paul is the ultimate floor general and probably the best  pure point guard when you factor in what the position traditionally is. His IQ is insane and he plays defense. That’s why I give the Rockets the edge here.

Shooting Guard - Klay Thompson struggled from three in the series against the Pelicans and is still shooting 37.8 percent in the playoffs. Thompson can not be left alone from beyond the arc and usually has a quarter of two where he turns into a human flamethrower. The fact he hasn’t exploded yet can’t make Houston fans feel too good. He’s probably due. James Harden has had a few hiccups these playoffs, but he’s still averaging 28.5 points, five rebounds and 7.4 assists. Harden usually has his fingerprints all over the game and is almost unstoppable in ISO situations. In the last five minutes of a back and forth game, I feel comfortable giving the ball to the Beard over and over, as he’s either getting a layup, setting someone up for an open shot or getting to the free throw line. The defense can’t win.

Small Forward - Trevor Ariza has been underrated in this league for years, as he defends his tail off, rebounds well for his position and is a respectable outside shooter. At nearly 33 years old, Ariza still plays at a high level and deserves more credit for the Rockets success. However, the Warriors have Kevin Durant on the other side, one of the best scorers in NBA history and a mismatch nightmare who unlocks everything for this Golden State team. He’s the one guy who puts these Warriors over the top and frustrating as hell to game plan for.

Center - JaVale McGee is likely going to see more playing time in this series with the Rockets rolling out Clint Capela. McGee played just 18 minutes in the Pelicans series and Zaza Pachulia has played just two playoff games overall, which is good considering he has a bad habit of accidentally hurting guys. Regardless, Capela is the better player between the three, as he’s a capable of scorer who rebounds and blocks everything in sight. The soon-to-be-24-year-old has taken his game to new heights and has become the x-factor for these Rockets. Capela not only does the dirty work, but he’s an easy two points for two high IQ ball handlers when the defense is caught slipping. If the Rockets win this series and eventually an NBA title, Capela will be a big reason why.

Power Forward - PJ Tucker has replaced Ryan Anderson in the playoffs, and it’s been a positive move with him shooting 45.8 percent from three while bringing that defensive mentality to the court. Tucker is an old school player who doesn’t back down from a challenge and adds that spark of toughness to what some consider to be more of a finesse team. Draymond Green is an assist away from averaging a triple-double in the playoffs and remains one of the best defenders in the league. Whether it’s getting key rebounds, locking up the opponents best player or sending KD a late night motivation text, Draymond is the heart of the Warriors and allows everybody else to be themselves.

Bench - Andre Iguodala always seems to go from being a corpse in the regular season to finding the fountain of youth in the playoffs. It’s amazing actually. A combination of Shaun Livingston and Quinn Cook is averaging 13.9 points and three assists in the playoffs, which is just a bonus for a team so freaking loaded. Kevon Looney and David West don’t do anything sexy, but they bring that length and clean up the boards for the second unit, giving those talented shooters second chance points. The Rockets have arguably the best sixth man in the league in Eric Gordon, who hasn’t hit his threes this postseason but is still a deadly shooter and capable of dropping 30 any given night. Gerald Green should see more minutes due to his ability to stretch the floor, and he’s been a positive on the glass for his position in limited playing time. Ryan Anderson can’t defend anything and is watching his minutes decrease drastically, but he’s still a respectable shooter who gives the Rockets even more offense.

Coach - Mike D'Antoni has been a respected name in this league for years. He’s a coach who has a system, sticks to it and finally has the elite pieces in place to realistically chase a title. He also has his team playing defense for once, as the Rockets are second in defensive rating in the playoffs this season, only behind the Warriors. Steve Kerr has put his name in the hat as one of the top coaches in the league. He pushes the right buttons, finds ways to keep his team loose and confident and isn’t afraid to think outside of the box or tweak things to get the best out of his team. It doesn’t hurt to have elite talent across the board, but Kerr has proven he has a high basketball IQ and is more than just throwing guys out there and taking the credit.

Overall - Rockets in 7. The Warriors are obviously the smart pick, but if there’s any team capable of beating them, it’s these Rockets. Two elite ball handlers with ridiculous basketball IQs, shooters everywhere, advantage in post play, guys who are hungry to taste the ultimate success, improved defense and home court advantage. The Rockets still have another gear they can get to and Curry always brings the best out of CP3. I think the Rockets can do just enough to squeeze out a classic seven-game series.

The pick in this article is the opinion of the writer, not a Sports Chat Place site consensus.
Previous Pick
2018 NBA Eastern Conference Finals: Position-By-Position Breakdown Of Cleveland Cavaliers-Boston Celtics
Next Pick
Houston Rockets vs. Golden State Warriors - 5/14/18 NBA Pick, Odds, and Prediction