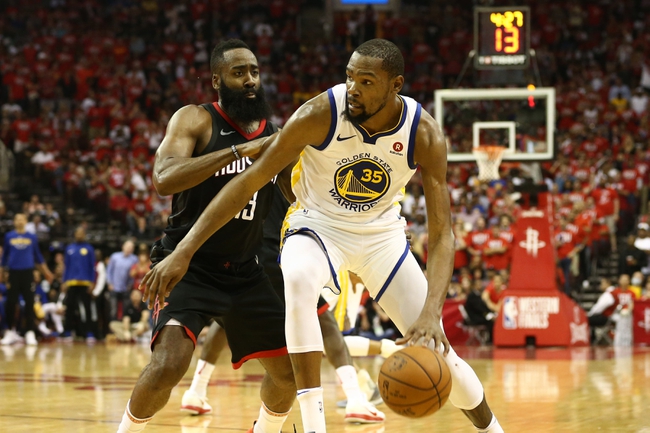 The Houston Rockets look to level the series against the Golden State Warriors in Game 2 of the Western Conference Finals at the Toyota Center on Wednesday.

The Golden State Warriors came into Game 1 as slight underdogs according to the bookies, but they certainly played like the defending champs as they beat the Rockets by 119-106 on Monday. Kevin Durant led the way with 37 points on 14 of 27 shooting, Klay Thompson drained six treys to finish with 28 points while Stephen Curry chipped in with 18 points and eight assists. Draymond Green had just five points but had his fingerprints all over the game as he racked up nine rebounds with nine assists, two steals and two blocks to go with his early technical foul. As a team, the Warriors shot a healthy 52 percent from the field and 13 of 33 from the three-point line but both teams were making tough shots until the second half where the Warriors outscored the Rockets by 63-50. Defensively, the Warriors were locked on right from the tipoff as they forced the Rockets into three shot clock violations and plenty of tough shots which led to a significant 18-3 edge in fast break points.

Meanwhile, the Houston Rockets started the game red-hot as they opened the game on a 12-4 run but they just looked outmatched by the end of the game as they just couldn’t keep up the pace in the second half. James Harden led the team with 41 points and seven assists while shooting 14 of 24 from the field, Chris Paul added 23 points with a game-high 11 rebounds while Eric Gordon chipped in with 15 points off the bench. As a team, the Rockets shot 46 percent from the field and 13 of 37 from the three-point line but they really needed to hit a lot more threes for their isolation offense to work. Clint Capela only scored 12 points but the Rockets just couldn’t get the ball to him in pick and roll situations while Trevor Ariza was held to just 23 minutes of action as he was plagued with foul trouble early on.

You never want to overreact after Game 1 of any series but you have to be very worried if you are a Rockets fan. Harden drained five treys en route to a game-high 41 points while Paul was right there with him, but they just didn’t get nearly enough support from the rest of their team which ultimately cost them home-court advantage. As for the Warriors, they will be over the moon after taking care of business in the series opener and a lot of the credit goes to Durant who continues to be a matchup nightmare for every team. The Rockets will come out firing in what is basically a must-win game but the Warriors are 5-1 ATS in the last six meetings in Houston and I think that trend continues here.