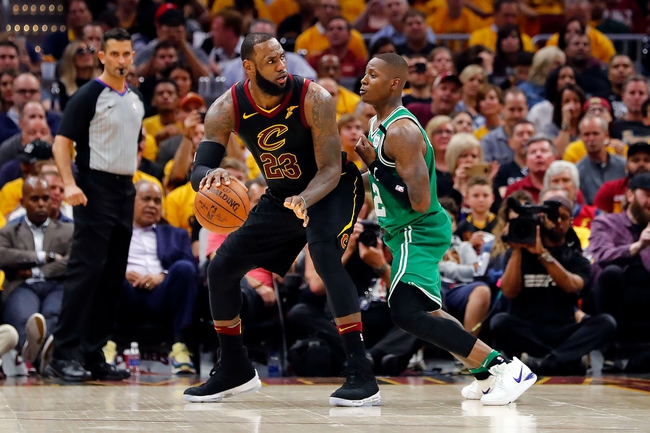 The Cleveland Cavaliers and the Boston Celtics duke it out in Game 4 of the Eastern Conference Finals at the Quicken Loans Arena on Monday night.

The Boston Celtics had all of the momentum going into Game 3 but now they will be going back to the drawing board after getting blown out by 116-86 on Saturday night. Jayson Tatum led the team with 18 points, Terry Rozier added just 13 points while Jaylen Brown and Greg Monroe each scored 10 points but no other player finished in double figures. As a team, the Celtics shot just 39 percent from the field and a miserable six of 22 from the three-point line and on the defensive end, they had no answers for the Cavaliers who shot a healthy 50 percent from the three-point line. Despite the demoralising loss, the Celtics can still take a commanding 3-1 series lead with a win on Monday but they’re going to have to start better than they did in Game 3 as this game looked to be over once the Celtics fell behind by 27-11 in the first quarter.

Meanwhile, the Cleveland Cavaliers looked unrecognizable in the first two games of the series but it looks like the extended layoff paid off for them as they clearly looked like a fresher team right from the tipoff. LeBron James led the way with 27 points and 12 assists, Kyle Korver added 14 points, Kevin Love and George Hill each scored 13 points while JR Smith chipped in with 11 points. As a team, the Cavaliers looked great on the offensive end as they shot a 48 percent from the field and 17 of 34 from the three-point line but what really impressed me was their effort on the defensive end as they held the usually efficient Celtics to below 40 percent shooting. Three-point shooting was another key to the victory and it was James, Smith and Korver who led the way, combining to drain an impressive 10 of 11 from distance.

The long layoff seemed to do wonders for the older Cavaliers as they came out with fresh legs and dominated the game right from the opening tip. LeBron didn’t put up big numbers like he usually does but that’s because he didn’t have to as the role players stepped up at home, particularly from the three-point line as they made five of their first seven attempts to finish with 17 makes for the game. As for the Celtics, they just didn’t come out with the same intensity they usually show at home and it was evident that they were never coming back from that early double-digit hole. You never want to overreact from one loss, but the Celtics who have now lost five of their six road games in these playoffs which is a cause for concern. The Cavs look amazing when they are making their threes but they’ve been anything but consistent this season, particularly on the defensive end. With that being said, just about all the betting trends are in favor of the more reliable Celtics in this matchup and I’ll happily take them with the free points here.