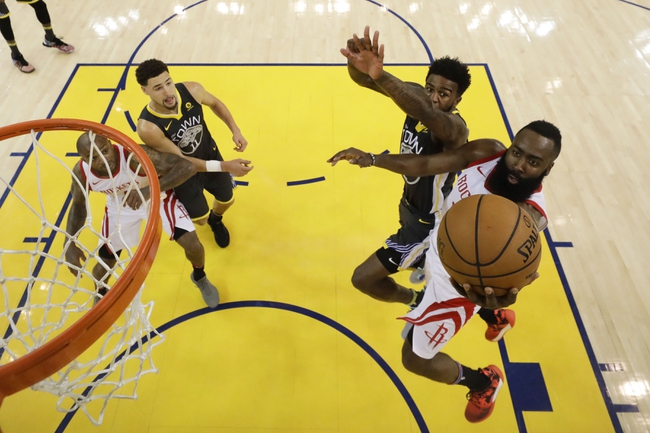 The Houston Rockets and the Golden State Warriors collide in a pivotal Game 5 of the Western Conference Finals at the Toyota Center on Thursday.

The Golden State Warriors really missed out on a big chance to take a commanding lead in the series as they fell to the Rockets by 95-92 in Game 4. Stephen Curry led the team with 28 points but missed nine of his last 10 shots to finish on just 10 of 26 shooting from the field. Kevin Durant added 27 points on nine of 24 shooting while Klay Thompson chipped in with just 10 points. Draymond Green racked up 11 points with 14 rebounds and eight assists and the Warriors actually opened the game on a 12-0 run but they still couldn’t get the job done. If you watched the game, you would’ve thought it was going to be a blowout after the Warriors outscored the Rockets by 34-17 in the third quarter to flip a seven-point halftime deficit into a lead going into the fourth but the Warriors just looked out of sorts late in the game. Andre Iguodala sat out Game 4 with a knee injury and is currently listed as questionable for Thursday.

Meanwhile, the Houston Rockets were able to pull off their best win of the season as James Harden and Chris Paul combined for 57 points in a win for the ages. Eric Gordon added 14 points off the bench, Clint Capela scored eight points with 13 rebounds while PJ Tucker chipped in four points and a game-high 16 rebounds. As a team, the Rockets shot just 39 percent from the field and 12 of 38 from the three-point line but they won this game with their defense in the fourth quarter where they outscored the Warriors by 25-12. The Rockets really did looked outmatched when Curry had the Warriors flying in the third quarter but they just refused to lay down and then were good enough to capitalize on turnovers. With the win, the Rockets now reclaim home-court advantage and essentially turn this series into a best-of-three.

Just when you thought the Rockets were down and out, they pull off one of their best performances ever. Harden shot just 11 of 26 from the field but was great in the first half while it was Paul who drained five three-pointers to carry the scoring burden late in the game. With the series shifting back to Houston, the Rockets certainly have all the momentum but you can never discount the ability of the Warriors to bounce back, especially because they already did that in Game 3. Neither team has won two consecutive games in this series but the Rockets are now 4-3 SU against the Rockets if you count the regular season, so I’m going with my gut and taking the Rockets to take the series lead in this one.