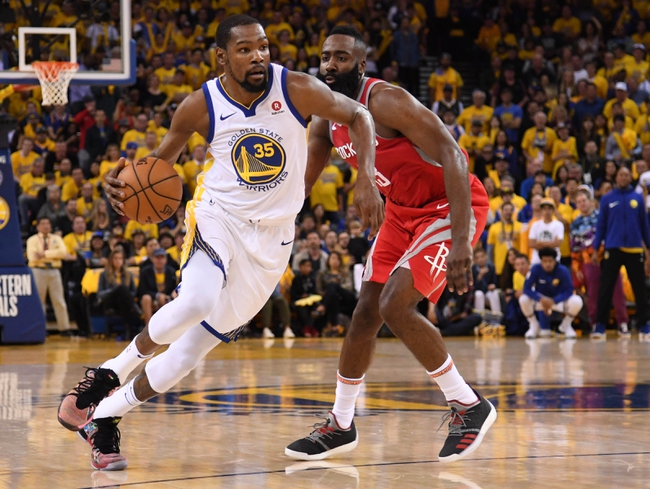 The Houston Rockets play host to the Golden State Warriors in Game 7 of the Western Conference Finals at the Toyota Center on Monday.

The Golden State Warriors look primed for another NBA Finals berth after blowing past the Rockets in a 115-86 in Game 6 to level the series. Klay Thompson has been dormant in this series but he drained nine three-pointers to lead the team with 35 points, Stephen Curry added 29 points and six assists, Draymond Green racked up four points with 10 rebounds and nine assists while Kevin Durant chipped in with 23 points. As a team, the Warriors shot 49 percent from the field and 16 of 38 from the three-point line but this game was all about the second half where the Warriors outscored the Rockets by 64-25. In fact, the Warriors trailed by as many as 17 points in the first quarter but Thompson just couldn’t miss and there’s no doubt the Warriors got the benefit of a lot of foul calls at home.

Meanwhile, the Houston Rockets will be kicking themselves after getting blown out by the Warriors after jumping out to that early 17-point lead. James Harden led the way with 32 points, seven rebounds and nine assists, Eric Gordon stepped into the starting lineup and added 19 points while Trevor Ariza chipped in with 14 points. As a team, the Rockets shot just 40 percent from the field and 15 of 39 from the three-point line but there’s no denying how much Chris Paul was missed from the lineup as the bench looked real thin with Gordon starting. The Rockets had to play their starters heavy minutes and they just ran out of gas in the second half. Paul has not yet been officially ruled out for Game 7 but the rumors are that he isn’t likely to play.

In typical fashion, the Warriors were able to stave off elimination with a dominant performance in Game 6 and they made it look easy. The Rockets are still in position to pull off the upset and advance to the NBA Finals given that this game is in Houston, but the loss of Paul just can’t be underestimated. I’m sure Harden will step up and probably have his biggest scoring night of the series, but unless the Warriors hand them a bunch of turnovers to gift them some free points, I don’t see the Rockets having enough to get the win here. Assuming that Paul is indeed unable to play, I’m going with the Warriors to pull away in the second half and come away with the win.

The pick in this article is the opinion of the writer, not a Sports Chat Place site consensus.
Previous Pick
Boston Celtics vs. Cleveland Cavaliers - 5/27/18 NBA Pick, Odds, and Prediction
Next Pick
2018 NBA Finals: Position-By-Position Breakdown Of Cavs-Warriors