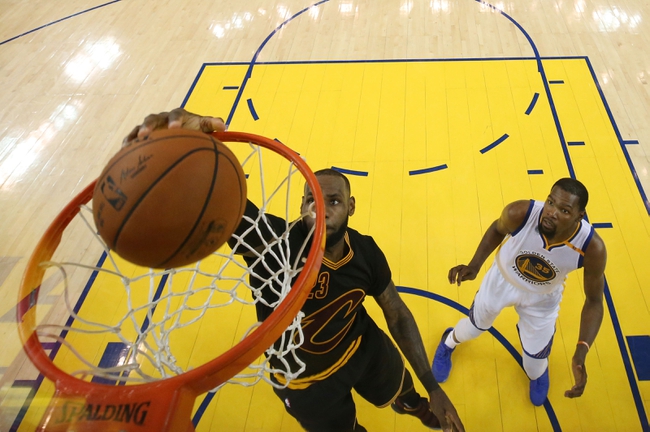 The Cleveland Cavaliers and Golden State Warriors meet for the fourth straight year in the NBA Finals. Yippee. There’s far less buzz going around for this series, considering the Cavs don’t look the same as a year ago, and, well, the Warriors are absolutely stacked and more mature than they’ve ever been. Still, if we all knew what will happen in sports, there would be no need to play the game.

Here is a breakdown of the upcoming NBA Finals position by position.

Point Guard - George Hill is one of the few vets on the Cavs, and he’s played well in spurts, averaging nearly double-digit points and turning the ball over just once in over 29 minutes these playoffs. Hill also has shown when he’s aggressive offensively, he can actually be a difference maker for this club. Unfortunately, he’s not Steph Curry, the best shooter in the league and just took the Houston Rockets heart out of their chest in the third quarter of game seven. This position is quite lopsided.

Shooting Guard - JR Smith is shooting 36.8 percent from three in these playoffs, but his impact seems to be less than that percentage suggests. Smith has been extremely streaky and hasn’t shown up when the Cavs needed him most. If the Cavaliers have any chance of making this a series, JR has to catch fire from deep, countering all the runs the Warriors go on throughout a game. Klay Thompson has become the clutch player for the Warriors and can still hold his own defensively. Making a combined 16 threes in his last three games, Thompson may be the hottest player entering the finals for either club.

Small Forward - Kevin Durant is great and puts the Warriors over the top. The guy doesn’t seem to miss when he’s either open or has a mismatch, and he’s a pest defensively with his lengthy frame. Durant is the most naturally talented player on the court most nights. Then there’s LeBron James, the best player to ever step on a basketball court and still capable of willing his team to victories despite all the miles on his legs and with his back against the wall. No matter how awful his roster is and who he’s going up against, you always feel you have a punchers chance with LeBron on your side.

Power Forward - Kyle Korver shot 42.4 percent from deep in the series against the Boston Celtics and even came away with a few key rebounds and blocks as well. When Korver doesn’t miss from the outside and makes a few hustle plays at the other end, he’s the one player you can count on the most for the Cavs outside of LeBron. Korver just needs to make a ton of threes in order to keep Cleveland in things. Draymond Green hasn’t found his offensive touch in a while, but he’s still one of the best defenders in the league and sets the tone for the rest of his teammates. His impact might not always show up in the boxscore, but Green may be the most important player on Golden State.

Center - It’s hard to trust Kevin Love, as he’s hit or miss when he’s on the court, and it seems like every other game he has some sort of injury. Love should be cleared for Thursday’s game, but it will likely be something else by game three. When Love is feeling well and playing engaged, he’s the second best player on the Cavs and gives them a whole different feel. The problem is that player is missing more than he’s not. The Warriors don’t play a traditional center, as sometimes it’s Green, JaVale McGee, Kevon Looney, Zaza Pachulia or whoever Steve Kerr can get away with putting down low. It doesn’t matter. Either way, a healthy Love has the advantage.

Bench: The Cavaliers don’t have a bench. Jeff Green has his moments, but he’s Jeff Green. Tristan Thompson has turned it on lately, but he lost his starting job for a reason. Jordan Clarkson and Larry Nance Jr. are making the Lakers look like geniuses, while Rodney Hood still hasn’t tapped into his potential and most fans are starting to give up on him. Thompson is the best of the bench and could be key if he brings that energy down low to give Cleveland an edge on the glass. The Warriors get most of their production from their starters, but Shaun Livingston still has a reliable mid range game and can be effective defensively. Quinn Cook can run the offense for stretches, Kevon Looney has done well rebounding in his limited minutes and Nick Young is a threat from deep when he sees the court. The Warriors have options and guys who seem to be ready when their number is called. The Cavs don’t.

Coach - Some may be starting to come around on Tyronn Lue and give him some props for coaching a this one-man band to the Finals. To me, LeBron is still the guy who pulls all of the strings for this organization. Lue may do more than originally thought, but he’s not one of the first names mentioned when talking about best coaches in this league. Steve Kerr may be a bit overrated than previously mentioned, but he still helped take this group of players to the next level, gets the best out of these guys in the third quarter and always keeps his team at a level head. You never see the Warriors get too high or too low. Kerr has a great pulse of his team and knows when to let them play and when they need a talking to. He’s the right man for the job.

Overall - The Cavaliers are outmatched at nearly every position except for LeBron. It's the most talented team in the world against one guy. LeBron is usually enough to give the Cavs a fighting chance, but these Warriors don't play with the same rules as the rest of the league. It’s unfair to expect one guy, no matter how great he is, to find a way to beat this team. I’ll be rooting for LeBron and the Cavs, simply because it would be one of the greatest feats in all sports. I also dislike the idea of all the great players teaming up and watering down the league. However, the Warriors should cruise in this series. So, Warriors in 5. However, I'd have no problem being wrong.