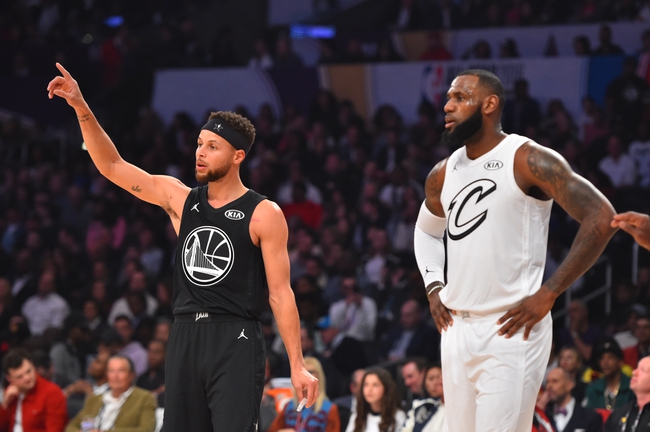 The Cleveland Cavaliers and the Golden State Warriors collide in Game 1 of the NBA Finals at the Oracle Arena on Thursday night.

The Cleveland Cavaliers booked their ticket to the NBA Finals with a 4-3 series win over the Celtics in the Eastern Conference Finals. Not surprisingly, LeBron James led from the front with averages of 33.6 points, 9.0 rebounds and 8.4 assists per game while Kevin Love averaged 15.1 points and 9.6 rebounds before suffering that head knock in Game 6 which caused him to sit out Game 7. Other than those two players, you won’t be able to find any consistent contributors throughout the series, but LeBron put the team on his back in the series finale to get the win. Kyle Korver has been dealing with the tragic loss of his younger brother and he didn’t receive consistent playing time while JR Smith is averaging just 8.5 points in these playoffs.

Meanwhile, the Golden State Warriors haven’t been at their absolute best in these playoffs and the injury to Andre Iguodala can’t be underestimated, but they still managed to find a way to scrape past the Rockets in a thrilling 7-game series in the Western Conference Finals. Kevin Durant averaged 30.4 points during that series and led the team with 34 points in Game 7, Stephen Curry averaged just 25.0 points and 5.7 assists but drained seven treys in the series finale, while Klay Thompson has been relatively quiet with averages of just 19.4 points. Compared to last season, the Warriors look like a stronger team, but somehow they look a lot more vulnerable as they constantly fell into that isolation offense trap which almost cost them the series against the Rockets.

There’s probably not too many people who are surprised that the Warriors were able to make it back to the NBA Finals, but the same can’t be said for the Cavaliers who have gone through so much adversity this season. In terms of matchups, the Warriors are clearly the better team at almost every position and they have the benefit of home-court advantage. I don’t think the Cavaliers have a chance in this series, but no one is expecting them to be successful at all so the pressure is on the Warriors in this one. It’s hard to see anything but a win at home for the Warriors to kick off the series, but I think the value is with the Cavaliers and the points.

The pick in this article is the opinion of the writer, not a Sports Chat Place site consensus.
Previous Pick
2018 NBA Finals: Position-By-Position Breakdown Of Cavs-Warriors
Next Pick
Golden State Warriors vs. Cleveland Cavaliers - 6/3/18 NBA Pick, Odds, and Prediction