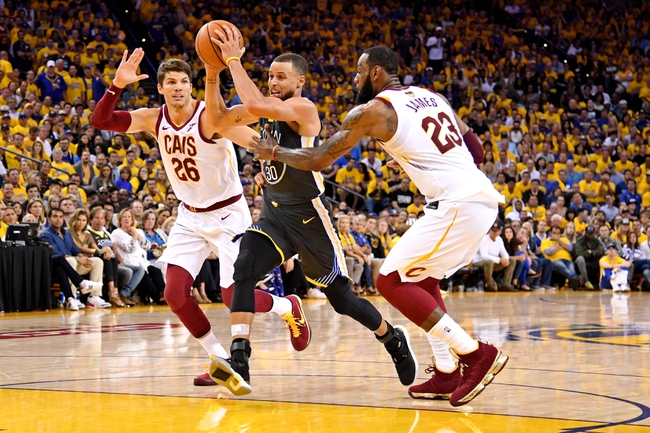 The Golden State Warriors and the Cleveland Cavaliers duke it out in a pivotal Game 3 of the NBA Finals at the Quicken Loans Arena on Thursday night.

The Golden State Warriors took a 2-0 series lead and defended home court with a dominant 122-103 win in Game 2. Stephen Curry drained nine treys on his way to 33 points with seven rebounds and eight assists, Kevin Durant bounced back from a rough shooting night in Game 1 to finish with 26 points and seven assists on 10 of 14 shooting while Draymond Green chipped in with five points, eight rebounds and seven assists. JaVale McGee was the spark for the Warriors early in the game as he rolled to the basket with regularity to finish with 12 points on six of six shooting, but the real boost came from Klay Thompson who scored 20 points on eight of 13 shooting despite dealing with a high ankle sprain he suffered in Game 1. As a team, the Warriors shot a healthy 57 percent from the field and 15 of 36 from the three-point line as they led by 13 points at halftime before running away with the game in the fourth quarter where Curry took over.

Meanwhile, the Cleveland Cavaliers needed to hit the ground running after their demoralizing Game 1 loss but that just didn’t happen. LeBron James led the team with 29 points, nine rebounds and 13 assists, Kevin Love added 22 points with 10 rebounds while George Hill chipped in with 15 points. As a team, the Cavaliers shot a miserable 41 percent from the field and nine of 27 from the three-point line which is a shame because they were only trailing by seven points early in the fourth quarter before Curry sparked the Warriors on a decisive 15-6 run to put the game out of reach. The Cavaliers just weren’t connected defensively and it allowed the Warriors to get going early with McGee in the first quarter, but to their credit, they were able to weather the storm of the third quarter to give themselves half a chance in the fourth.

Head to head, the over is 6-2 in the last eight meetings and the Warriors are 7-3 ATS in the last 10 meetings.

You just know that the Cavaliers would’ve been lamenting on their missed chances in Game 1 and they just didn’t come out focused in Game 2 which cost them. The Warriors inserted McGee into the starting lineup and reaped the rewards before Curry put on the finishing touches with a flurry in the fourth quarter. With the series shifting to Cleveland, I expect the Cavaliers’ role players to step up at home where they’ve been great in these playoffs but I just don’t see it being enough. It’s hard to go against this Warriors team, but LeBron and the Cavaliers are playing for their playoff lives now and I think they can bounce back and avoid the series sweep with a hard-fought win here.