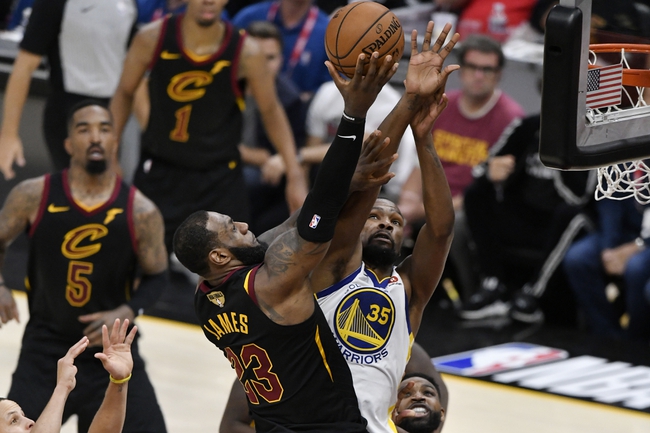 The Cleveland Cavaliers hope to avoid the sweep as they battle the Golden State Warriors in Game 4 of the NBA Finals at the Quicken Loans Arena on Friday.

The Cleveland Cavaliers will be hoping to stave off elimination and avoid the dreaded series sweep after falling to the Warriors in a 110-102 loss in Game 3. LeBron James started the game looking to involve his teammates and finished with a triple-double of 33 points with 10 rebounds and 11 assists, Kevin Love added 20 points while Rodney Hood provided the spark off the bench with 15 points on seven of 11 shooting. As a team, the Cavaliers shot just 43 percent from the field and nine of 31 from the three-point line which was good enough to keep them in the game because of their defense, but they just had no answer for Kevin Durant who scorched them for a game-high 43 points on 15 of 23 shooting.

Meanwhile, the Golden State Warriors are now just one win away from another NBA Championship after outlasting the Cavaliers in their own building. Kevin Durant drained six treys en route to 43 points, 13 rebounds and seven assists but he really didn’t get much support from his teammates. Klay Thompson scored just 10 points on four of 11 shooting while Stephen Curry chipped in with just 11 points on three of 16 shooting. Overall, it was an uncharacteristic performance from the Warriors who resorted to isolation basketball in the second half, but it paid off as Durant was simply clutch when it mattered. Andre Iguodala returned to the court and chipped in with eight points in 22 minutes of action.

Head to head, the under is 10-3 in the last 13 games overall and the Warriors are 4-1 ATS in the last five meetings.

You really get the feeling that the Cavaliers missed out on a chance to make this competitive series after they blew Game 1 so I’m not surprised that they’re now 48 minutes from a series sweep. The Warriors haven’t been at their absolute best in this series but they proved they can still win even if Curry shoots one of 10 from the three-point line. LeBron and the Cavaliers have played well to get to the finals but I feel this is the end of the road for them. With the Finals MVP award up for grabs, I expect Curry to bounce back from his rough shooting night in Game 3 and lead the Warriors to an easy win to cap off the season.