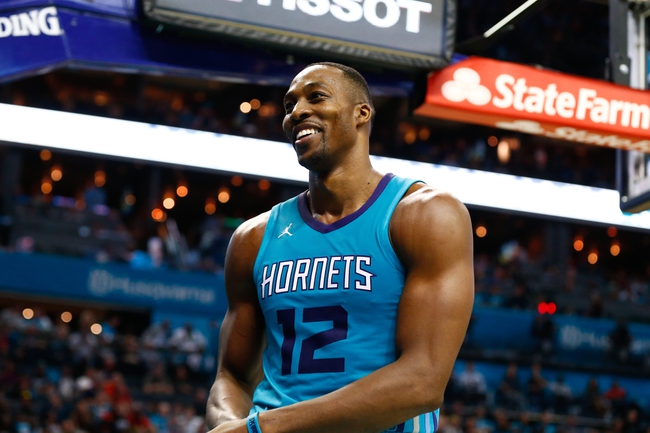 Dwight Howard was traded from the Charlotte Hornets to the Brooklyn Nets and is expected to be bought out in the next few weeks, making him a free agent. Howard says his goal is to help a team win and be allowed to play with a clean slate without anybody bringing up his past. As he approaches 33 years old, Howard isn’t the player he once was, but he still averaged a double-double last year and is still capable of being one of the top bigs in the game when motivated. He could be a potential game changer for a lucky team out there not looking to break the bank.

Here are five teams Dwight Howard should be looking to join in the 2018-19 NBA season.

Boston Celtics - The Boston Celtics were looking at Howard a few years ago and considered him their plan B if they didn’t land Al Horford. They should circle the wagons again with Aron Baynes and Greg Monroe unrestricted free agents. Howard is a true center who can fix the Celtics post defensive issues and allow Horford to spend more time at power forward. Boston was also just +0.7 in rebounds per game differential , which was 13th in the league, certainly a number that can improve. The Celtics are also legit title contenders with the return of Gordon Hayward and Kyrie Irving. This almost makes too much sense not to happen.

Washington Wizards - The Washington Wizards are a consistent playoff team and could be a club that makes a jump if LeBron James leaves for the West. Pairing Howard with a star backcourt in Bradley Beal and John Wall would give Washington that third all-star caliber player to finally give this squad more consistent and balanced firepower. The Wizards are also looking to move Marcin Gortat and that horrible contract, which would leave a massive hole at the center position. Sorry, Ian Mahinmi isn’t going to cut it. Howard wouldn’t be asked to do a ton for the Wizards due to the playmakers and shooting already on this team. Just catch lobs and clean up the glass.

Milwaukee Bucks - The Milwaukee Bucks are addicted to length and were linked to being interested in Hassan Whiteside late last season. If the Bucks are clearly looking to upgrade at center, why wouldn’t they take a look at Howard? Howard would be a better and more traditional fit alongside Giannis Antetokounmpo than John Henson currently is, and the Bucks were dead last in the league last season with an average of 39.8 rebounds per game. You could argue nobody needs Howard more than the Bucks. And it doesn’t help that Marshall Plumlee is an unrestricted free agent. Milwaukee is also a small enough market and not nationally promoted to the point Howard can simply focus on basketball and not the media hoopla. This could be a nice fit and one that puts the Bucks closer to an Eastern Conference Finals berth.

Dallas Mavericks - Mark Cuban and the Dallas Mavericks have been looking for a center for ages. Heck, the Mavs have struck out on DeAndre Jordon and Whiteside the last few years when it looked like both were leaning their direction at one point. Currently, the Mavericks don’t have a legit center on their roster. And yes, Dirk Nowitzki doesn’t count. The Mavericks are loaded with guard play and wings and don’t have that guy who can anchor the defense and control the glass. They have been linked to DeMarcus Cousins, but if the Mavericks miss once again, Howard would be a nice consolation prize. The Mavericks aren’t in the same position as other teams on this list to win much right away, but he would have lots of fun playing with a promising backcourt of Dennis Smith Jr. and Luka Doncic. This move could also intrigue Howard considering he’s already familiar with Texas, spending a few years in Houston. The Mavericks finally get their big man?

New Orleans Pelicans - Assuming the New Orleans Pelicans lose Cousins to free agency, and it looks like they will, why not give Howard a ring? Howard would be a nice second fiddle to Anthony Davis and help keep the Pelicans as one of the better rebounding teams in the league. I’m not sure about fit here, but New Orleans is a team that needs to surround AD with as much talent as possible and worry about things later. You can’t keep expecting the Brow to do all of the heavy lifting in his young years and expect to stay for the long term. The Pelicans are also a club that clearly isn’t worried about strong personalities, as guys such as Cousins and Rajon Rondo, players who have been considered tough to coach in the past, have thrived here. Lose Cousins and the Pelicans could get similar production for much cheaper in Howard.