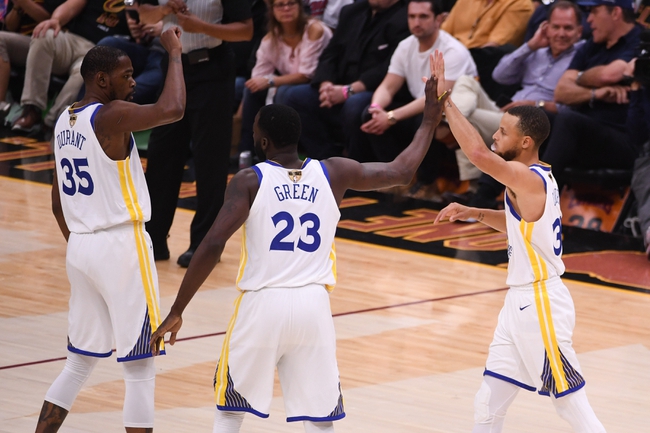 The Golden State Warriors have won the NBA title three of the last four years and enter this season as overwhelming favorites yet again. The Warriors have won no less than 51 games each of the last five years and enter this season with a win total of 63.5 wins. Last year, the Warriors won just 58 regular season games, the fewest by far during this championship stretch.

Let’s checkout the 2018-19 betting preview for the Warriors…

Key Player Losses: The Warriors lost some bench depth with the retirement of David West and players such as Omri Casspi, Zaza Pachulia and JaVale McGee leaving for other teams. None of those are key losses, but all four of those players played a part in the Warriors title run, especially McGee last year, who was easily one of the more improved players in the league.

Key Player Additions: DeMarcus Cousins is the best center in the league when he’s healthy, but he’s expected to miss a chunk of the season as he recovers from an Achilles injury. Cousins gives the Warriors an all-star presence down low and somebody who can not only score in the paint but also add physical play, taking pressure off of Draymond Green to do everything. However, the Warriors do play at their best when free flowing and playing up tempo, so it will be interesting to see how long Cousins can actually be effective on the court and what lineups he’s mixed in.

Draft: Jacob Evans is a physical player who can play guard or forward, and he has the ability to stretch the floor with a 37.7 percent shooting percentage from deep in three years at Cincinnati. Evans will obviously have trouble seeing consistent minutes on this team right away, but he does have potential to eventually become a productive player, if not in Golden State, somewhere else.

O/U Prediction: The Warriors have topped 63.5 wins in three of the last four years, so some would consider this a low number and an easy over. However, last year showed the Warriors may be hitting that wall. When you’re easily the best team in the world and make final runs each year, you lose motivation, get bored and simply take games off. Forget injuries, showing up night in and night out for 82 regular season games is exhausting for a team that knows the only thing matters is the month of June. We saw it with the Los Angeles Lakers, Boston Celtics and recently the Miami Heat. Every team is out to beat you, and you put together lackluster performances and don’t mind throwing away some regular season games. The Warriors have learned how to pace themselves and with that comes losses during the regular season. I’ll take the under.