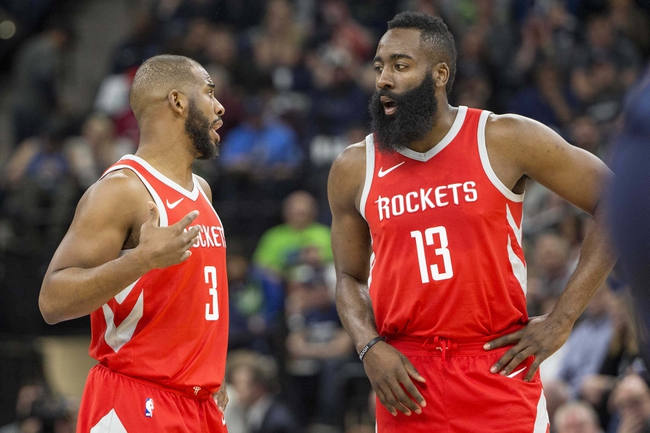 The Houston Rockets are coming off a franchise best 65 wins and were 48 minutes away from reaching the NBA Finals. With some better injury luck, the Rockets could finally end the Golden State Warriors title run and give NBA fans a much needed change. Well, at least in theory that could happen.

Let’s checkout the betting preview for the Houston Rockets…

Key Player Losses: The Rockets say goodbye to two of their better defenders in Trevor Ariza and Luc Mbah a Moute, as well a 38.2 career three-point shooter in Ryan Anderson. Getting Anderson off the books is a victory for the Rockets considering he was horrible defensively and there’s enough offense on this team already. The concern is losing Ariza and Mbah a Moute, guys who can defend, which is key to beating the Warriors and making it out of the West. You can’t beat Golden State by simply outscoring them for 48 minutes, as it plays in their hands with much deeper top tier talent.

Key Player Additions: The addition of Carmelo Anthony could be very good or very bad. We’ve seen Carmelo under Mike D'Antoni before and it didn’t work, and we saw Carmelo last year in OKC, and he was even worse. Still, we know Carmelo is an offensive machine who can catch fire and maybe in a friendly system with less pressure to carry the load, he’ll thrive. Maybe? Marquese Chriss is a quality young athlete who has potential defensively and is easy offense in fast breaks. Brandon Knight has also shown flashes of being an effective point guard, but he must get over these constant injury issues.

Draft: Vince Edwards improved his scoring average each of the four seasons at Purdue, has outside shooting ability and is pretty polished defensively. Edwards is one of those young players who could slowly become a rotation player over time sort of like Quinn Cook did with the Golden State Warriors. There’s potential with the second-team All-Big Ten secretion.

O/U Prediction: While some are worried about the Rockets defense, this is still one of the most well put together rosters led by the MVP in James Harden and the best pure point guard in Chris Paul. Clint Capela has come into his own, Eric Decker is arguably the best sixth man in the league and everybody else seems to thrive in their role. If Carmelo can simply make open threes, which he’s capable of despite last year, the Rockets are going to be just fine. The Rockets won 65 games last year with CP3 missing a chunk of the season and Harden missing 10 games. The Rockets also know how important home court is if they hope to reach the finals, so they’ll be gunning for the top seed in the West yet again. Easy over.