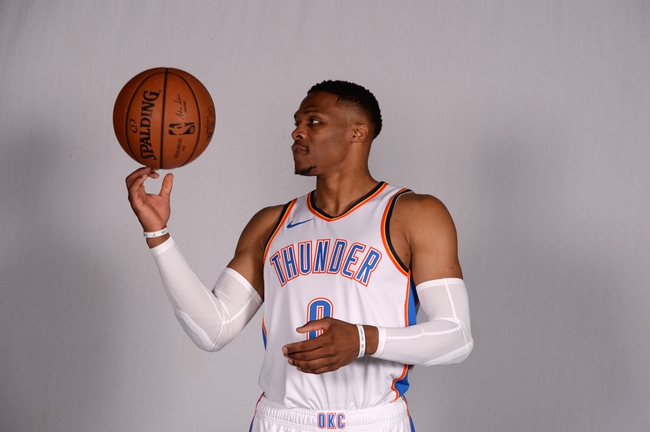 The Detroit Pistons will get their first look at their new head coach in Dwane Casey, who won Coach of the Year last season with the Toronto Raptors. For the most part, the Pistons are the same team they were a year ago, as they hope the Blake Griffin and Andre Drummond experiment can work and Reggie Jackson can stay healthy. For the preseason, I’m watching Luke Kennard, as he has a chance to be really good his sophomore year, and rookie Bruce Brown is a really good athlete with the ability to knockdown the outside shot. Glenn Robinson III returns to Michigan after two seasons with the Wolverines, and he brings shooting, athleticism and defensive effort. The Pistons have some intriguing pieces and could be a surprise team in the East, it’s just about everything coming together and a good head coach finally leading this franchise. The Detroit Pistons have lost four of their last six preseason games. Reggie Jackson is questionable with an ankle injury.

The Oklahoma City Thunder have major questions entering the preseason, as Russell Westbrook is sidelined after knee surgery, Paul George had work done to his knee and elbow, and Andre Roberson still hasn’t been cleared for contact following a knee injury. That’s three key players for OKC that we may not see at all in the preseason. The good news for the Thunder is that it opens up playing time for role players and a chance for them to expand their game. Dennis Schröder has to get comfortable and prove he can be a difference maker with the second unit. Jerami Grant has to become more aggressive and look for his shot, while Terrance Ferguson needs to start tapping into his potential his second year and prove why he was considered a steal of the 2017 draft. The Thunder need depth to become a dark horse title contender, and with the stars out, this is a chance for some of the others to prove their worth. The Oklahoma City Thunder have won five of their last six preseason games.

I'm not eating chalk with a Oklahoma City Thunder team that's missing three of their top four players, preseason or not. The Detroit Pistons are fairly healthy and have a head coach for the first time  in ages. I know it's not easy to play in OKC, but the Thunder lack playmakers and scoring without Westbrook and PG13 on the floor, and that won't change here. I'll take my free buckets with the Pistons if forced to pick.