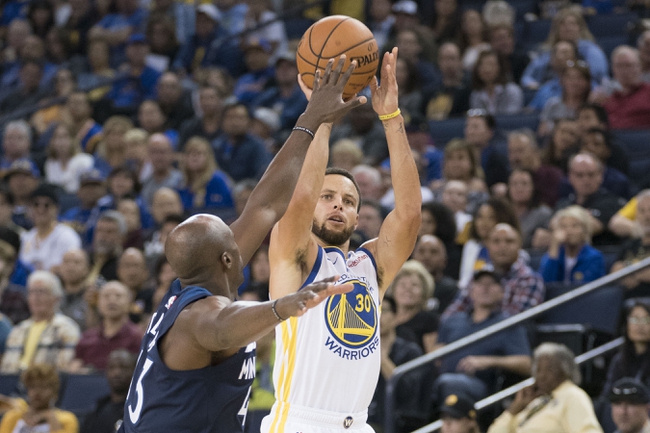 The Sacramento Kings and the Golden State Warriors meet in NBA preseason action from KeyArena in Seattle on Friday night.

The Sacramento Kings will look to keep their momentum going after starting the preseason on a high note with a 106-102 win over Phoenix in their last outing. Yogi Ferrell led the Kings with 26 points on 9 of 14 shooting with 6 triples while Harry Giles and Willie Cauley-Stein each had 14 points with Cauley-Stein adding 12 points for the double-double. De’Aaron Fox added 12 points while dishing out a team-high 5 assists while Frank Mason III added 11 points to round out the scoring in double figures for Sacramento in the victory. As a team, Sacramento is averaging 106 points per game on 47.6% shooting from the field, 44% from behind the 3-point line and 60.7% from the foul line this season.

The Golden State Warriors will look to bounce back after dropping their preseason opener by a final score of 114-110 in their last outing. Stephen Curry was in regular season form, pouring in 21 points on 7 of 11 shooting with 5 threes in just 20 minutes on the floor. Klay Thompson added 17 points on 7 of 13 shooting with 3 threes and Kevin Durant came right behind with 16. Jordan Bell and Marcus Derrickson each had 10 points with Bell adding a team-high 7 rebounds while Green led G-State by dishing out 8 assists. As a team, Golden State is averaging 110 points per game on 47.3% shooting from the field, 35.3% from behind the arc and 76.9% from the foul line this season.

Sacramento's win over the Lakers was solid, but let's not forget that most of the starters (LeBron and co) didn't see the floor for more than 15 minutes. Even in short bursts on the floor, the Warriors are showing regular season form of the powerful offense we've become accustomed to seeing, so with that said I'll side with the Warriors to win and cover on the neutral floor.