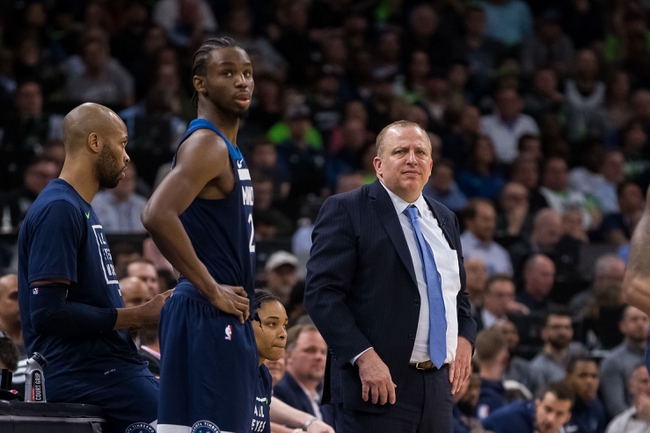 The Oklahoma City Thunder and Minnesota Timberwolves meet Friday in NBA action at the Target Center.

The Oklahoma City Thunder lost their preseason opener to the Detroit Pistons, 91-97. The Thunder are averaging 91 points on 36.6 percent shooting and allowing 97 points on 46.4 percent shooting. Dennis Schroder is averaging 21 points and nine assists while Steven Adams is averaging 17 points and 12 rebounds. Raymond Felton is the third double-digit scorer and Nerlens Noel is grabbing seven rebounds. The Thunder have shown over the years that they’re just not a good team offensively without Russell Westbrook on the floor, and with him sidelined for a few weeks, it doesn’t bode well for this team scoring wise. The good news is that all of the role players for the Thunder are seeing extended minutes this preseason and have chances to prove themselves. The Oklahoma City Thunder have won five of their last seven preseason games. Abdel Nader and Paul George are questionable.

The Minnesota Timberwolves are 1-1 in preseason play after losing to the Los Angeles Clippers, 101-128. The Timberwolves are averaging 107.5 points on 39.4 percent shooting and allowing 119 points on 51.1 percent shooting. Karl-Anthony Towns is averaging 15 points and 6.5 rebounds while Anthony Tolliver is averaging 12.5 points and 2.5 assists. Andrew Wiggins is the third double-digit scorer and Derrick Rose is dishing one assist. The Timberwolves have been awful defensively in two preseason games, which isn’t something you want to see from a team coached by Tom Thibodeau. You also have to question just how much the Jimmy Butler rumors are impacting the rest of this Timberwolves roster, as things seem to be heating up again and a trade seems like it’s going to take place sooner than later. Focus can’t be 100 percent on basketball right now for these Timberwolves when one of their top players isn’t around. The Minnesota Timberwolves have won seven of their last 10 preseason games.

I don't want to lay chalk with a Minnesota Timberwolves that has this dark cloud hanging over them, but the OKC Thunder can't score when Westbrook isn't on the court. It doesn't matter if it's preseason or regular season, there's just not a playmaker who can create their own shot or create for others, so the ball sticks. I'll lay the chalk with the Timberwolves, only as a fade from the Thunder.