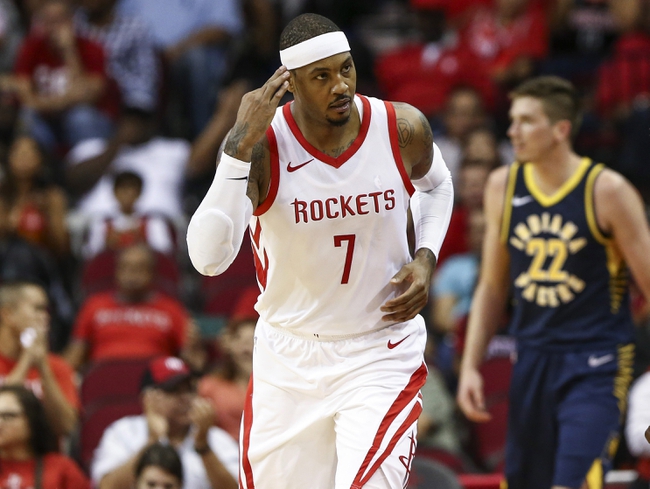 The Houston Rockets and the San Antonio Spurs meet in NBA preseason action from the AT&T Center on Sunday afternoon.

The Houston Rockets will look to bounce back from their first loss of the preseason coming in the form of a 110-100 loss to Indiana in their last outing. James Harden led the Rockets with 17 points along with 10 assists for the double-double while Carmelo Anthony added 16 points on 6 of 9 shooting with 4 threes. Michael Carter-Williams added 15 points while James Ennis III and Eric Gordon each logged 12 points to round out the double digit scoring for Houston with Ennis adding a team-high 6 rebounds. As a team, Houston is averaging 115.5 points per game on 46.9% shooting from the field, 41.9% from behind the arc and 73.8% from the foul line this season.

The San Antonio Spurs will look to build on their 2-0 start to the season after a 117-90 thumping of Detroit in their last outing. Dejounte Murray led the Spurs with 16 points and 11 rebound for the double-double while LaMarcus Aldridge added 14 points and Pau Gasol chipped in 13 on a perfect 4 of 4 shooting from the floor. Marco Belinelli added 12 points to round out the scoring in double figures for the Spurs in the victory. As a team, San Antonio is averaging 110.5 points per game on 49.7% shooting from the field, 41.7% from behind the 3-point line and 80% from the foul line this season.

Houston may have fallen to Indiana in their last outing but I still feel the Rockets have the greater depth and the better team from top-to-bottom in this matchup. Since we are getting the better team with points, I'll take Houston and the free bucket on the road