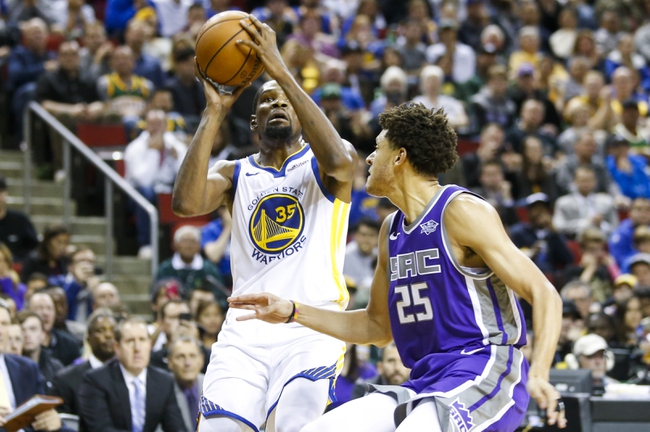 The Phoenix Suns and the Golden State Warriors meet in NBA preseason action from Oracle Arena on Monday night.

The Phoenix Suns will still be looking for their first win of the preseason after falling to 0-2 with a 115-93 loss at the hands of the Portland Trail Blazers in their last outing. DeAndre Ayton led the Suns with 19 points and 14 rebounds for the double-double while Isaiah Canaan had 11 points and Dragan Bender and Trevor Ariza each had 10 points to finish off the scoring in double figures for the Suns in the losing effort. Josh Jackson shot just 4 of 19 for 9 points but led the Suns with 7 assists in the defeat. As a team, Phoenix is averaging 97.5 points per game on 41.5% shooting from the field, 25.9% from behind the arc and 74.2% from the foul line this preseason.

The Golden State Warriors will look to build on their first win of the preseason coming in the form of a 122-94 win over Sacramento in their last outing. Klay Thompson had 30 points on 10 of 15 shooting with 6 triples while Kevein Durant added 26 points, 6 rebounds and a team-high 7 assists as the only two Golden State scorers in double digits in the win. Marcus Derrickson and Damian Jones each contributed a team-high 7 rebounds in the winning effort for the Warriors. As a team, Golden State is averaging 116 points per game on 49.5% shooting from the field, 35.4% from behind the arc and 75% from the foul line in the preseason.

Phoenix burned me last time out as Ayton’s efforts carried over but not to the rest of the team, and I worry that the Suns won’t be able to keep up with Golden State. I know it’s preseason, but the Warriors appear to be in regular season form offensively, and I just don't see Phoenix doing enough to keep this one within single digits so I'll lay the points with the Warriors here