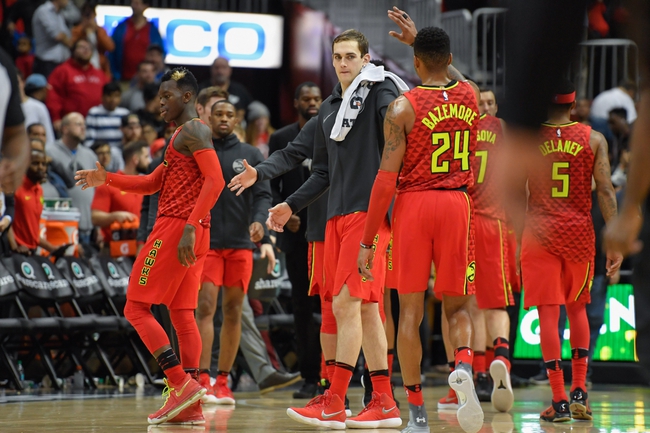 The San Antonio Spurs haven’t been on the hardwood since Friday when the team pounded Detroit 117-93 to improve to 2-0 in the NBA preseason. San Antonio burned the nets at over 56% from the floor while limiting the Pistons to just  34.8% including an ice cold 10-39 from beyond the arc.

Dejounte Murray topped the Spurs attack with 16 points while hauling in a contest high eleven rebounds on 7-12 shooting followed by LaMarcus Aldridge on 7-11 accuracy. San Antonio received 13 points and five yanks from Pau Gasol on 4-4 from the floor while Marco Belinelli tossed in 12 points on 4-7 from the field.

The Atlanta Hawks fell to 1-2 in NBA preseason action following a 113-94 loss to Oklahoma City on Sunday. Atlanta had problems hitting shots at 38% from the floor and even though the Thunder were limited to 40.9% accuracy, OKC held a 51-38 edge on the backboards and totaled a crucial 14 more looks at the basket.

Alex Len led the Hawks offense with 18 points on 5-10 from the field with Trae Young tossing in 16 points on 5-13 shooting. Atlanta saw Taurean Prince net 13 points, grab five boards and hand out four assists on 4-8 from the floor followed by Omari Spellman with ten points and a team high seven rebounds on 4-10 from the floor including 2-7 from distance.

I'll gowith San Antonio who probably stay with their starters longer or so I hope...

The pick in this article is the opinion of the writer, not a Sports Chat Place site consensus.
Previous Pick
Sacramento Kings vs. Washington Wizards - 10/29/17 NBA Pick, Odds, and Prediction
Next Pick
NBA News