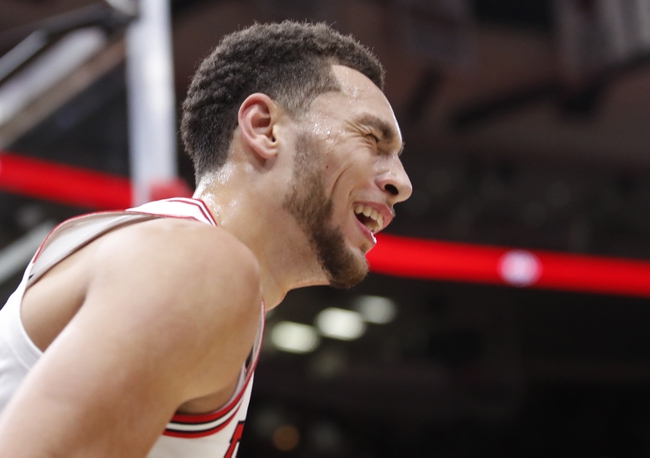 The Indiana Pacers and Chicago Bulls meet Wednesday in NBA preseason action at the United Center.

The Indiana Pacers are 2-1 in preseason play and will play their final game, all of which have taken place on the road. The Pacers are averaging 108.3 points on 43.3 percent shooting and allowing 103.7 points on 43.3 percent shooting. Victor Oladipo is averaging 23.5 points and 2.5 assists while Domantas Sabonis is averaging 16 points and 12.7 rebounds. Tyreke Evans is the third double-digit scorer and TJ Leaf is grabbing 7.7 rebounds. The Pacers have been one of the top rebounding teams in the preseason, which includes averaging 12 offensive rebounds per game. The Pacers have also had five double-digit scorers, none of which include Myles Turner, so this is a club that’s showing depth and improvement from last years regular season. The Indiana Pacers have won five of their last seven preseason games.

The Chicago Bulls look to get back to a .500 record and snap back-to-back losses in their second home game. The Bulls are averaging 104.7 points on 41.8 percent shooting and allowing 114 points on 46.6 percent shooting. Bobby Portis is averaging 18.3 points and 5.3 rebounds while Zach LaVine is averaging 18.3 points and 1.3 assists. Antonio Blakeney is the third double-digit scorer and Kris Dunn is dishing 2.7 assists. The Bulls continue to play poor basketball in the preseason, as they’re 25th in points per game and 30th in points allowed per game. Yes, the Bulls are missing some of their better players in Lauri Markkanen and Denzel Valentine, but as of now, it appears this club is right on track for where most expect them to be once the games actually count. The Chicago Bulls have lost five of their last eight preseason games.

Besides the Minnesota Timberwolves, it's hard to find a team playing worse than the Chicago Bulls throughout the preseason. The Bulls can't play defense, aren't shooting well and simply look like a team that doesn't want to play basketball. The Indiana Pacers have been a solid preseason team dating back to last season and are capable of playing even better. I have no choice but to eat the bucket, as backing the Bulls is not an option with the way they've played.