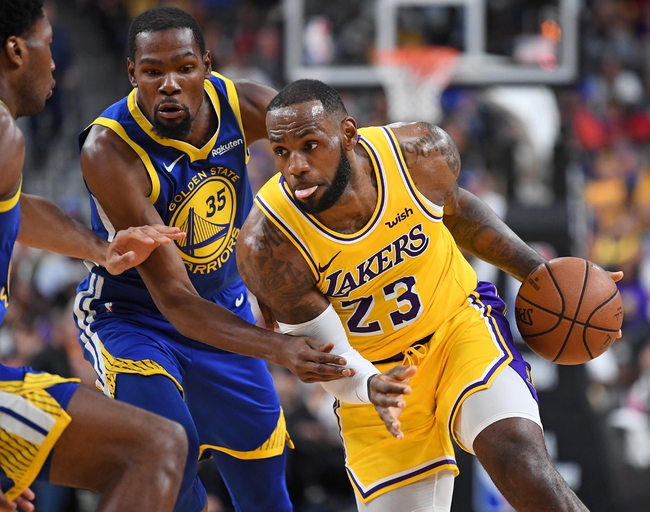 The Los Angeles Lakers look to finish the preseason with a .500 record after winning two of their last three games. The Lakers are averaging 111.2 points on 46 percent shooting and allowing 115.2 points on 44.7 percent shooting. Brandon Ingram is averaging 17.4 points and five rebounds while Kyle Kuzma is averaging 15.2 points and 3.8 rebounds. LeBron James is the third double-digit scorer and Lance Stephenson is dishing 3.4 assists. The Lakers just beat the Warriors on Wednesday and seem to be playing with more of a pep in their step, especially on the offensive side. You’d still like to see the Lakers improve and give more effort defensively, but as of right now, this is a team enjoying itself and has been fun to watch. The Los Angeles Lakers have split their last eight preseason games.

The Golden State Warriors look to end the preseason on a high note after losing three of their first four games. The Warriors are averaging 113.5 points on 48.2 percent shooting and allowing 112 points on 42.6 percent shooting. Klay Thompson is averaging 22.3 points and 4.3 rebounds while Stephen Curry is averaging 22.3 points and 4.3 assists. Kevin Durant is the third double-digit scorer and Quinn Cook is dishing 2.5 assists. The Warriors are second among teams in the preseason with 27.8 assists per game. The Warriors are also one of those teams that is just going through the motions in these meaningless games, waiting for the regular season to begin so they can get ready for their title defense. As long as they stay healthy, the preseason is a success for the Warriors. The Golden State Warriors have split their last six preseason games.

Again, I'm not the guy who is looking to lay big numbers in a preseason game, and the Los Angeles Lakers have shown more energy throughout the preseason than the Warriors. The Golden State Warriors are a team that knows where they're at with things and their main goal is not not get injured. The Lakers have shown more effort defensively as of late and have been aggressive offensively. The Warriors are sleepwalking and waiting for the regular season to begin. I'll take the points here.

The pick in this article is the opinion of the writer, not a Sports Chat Place site consensus.
Previous Pick
Portland Trail Blazers vs. Sacramento Kings - 10/12/18 NBA Pick, Odds, and Prediction
Next Pick
NBA Power Rankings for the Week Starting October 16, 2018 (Before Week 1)