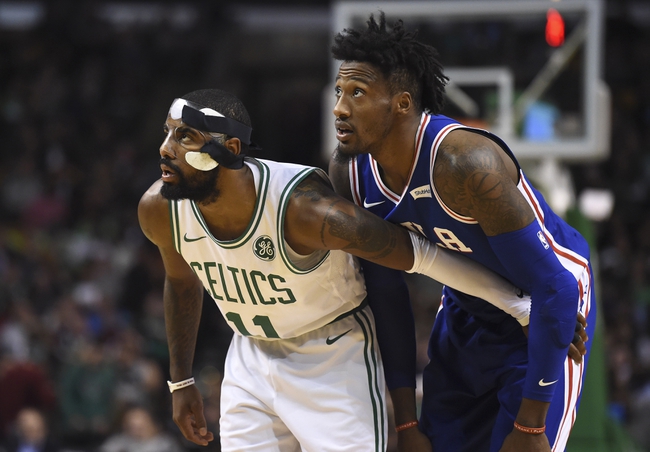 The Philadelphia 76ers and Boston Celtics meet Tuesday in NBA action at the TD Garden.

The Philadelphia 76ers hope to build on last season that ended with a second round playoff exit against these Boston Celtics. The Philadelphia 76ers return their key nucleus in Joel Embiid, Ben Simmons and Dario Saric, but it’s the production of guys such as Markelle Fultz, T.J. McConnell and the newly acquired Wilson Chandler that will possibly take this franchise over the top. We know the 76ers have young top tier talent in their starting lineup, but the depth and the bench production has to shine if Philly is going to be taken seriously as a team that can make it out of the Eastern Conference. While it’s just one game, beating the Celtics in their building opening night, would send an early message and give this young group confidence moving forward. The Philadelphia 76ers have lost their regular season opener in each of their last four years. Mike Muscala is doubtful with an ankle injury.

The Boston Celtics were five minutes away from beating the Cleveland Cavaliers to make a trip to the NBA Finals, and that was without Kyrie Irving and Gordon Hayward on the court. The Celtics get possibly their top-two players back from injury and are arguably the deepest team in the league. Jayson Tatum showed what he could do as a rookie, Terry Rozier really came into his own with expanded minutes, Jaylen Brown has improved drastically as a more confident player and Marcus Smart continues to make those hustle plays that make a difference in wins and losses. With the return of two all-stars, those guys can go back to being role players and thrive with less expectations on them to lead the way. The Celtics are a more complete team than last year and have to be considered the frontrunners to make it out of the Eastern Conference. The Boston Celtics have won three of their last four regular season openers.

While this became a bit of a rivarly last season between two teams that don't like each other, the Celtics have won seven of the last nine meetings against the 76ers and have gotten the better of the number most times as well. You know the TD Garden is going to be jumping with the return of Kyrie and Hayward back on the court, and the depth of the Celtics overall is scary. I'm not looking to step in front of these Celtics at home, at least until the lines start getting crazy with the usual public money. The 76ers, a team that lacks overall depth, will also be without Muscala, Wilson Chandler, Jerryd Bayless and Zhaire Smith for this contest. This is a tough spot for the 76ers to open the season. Give me the Celtics at home.

The pick in this article is the opinion of the writer, not a Sports Chat Place site consensus.
Previous Pick
NBA Power Rankings for the Week Starting October 16, 2018 (Before Week 1)
Next Pick
Golden State Warriors vs. Oklahoma City Thunder - 10/16/18 NBA Pick, Odds, and Prediction