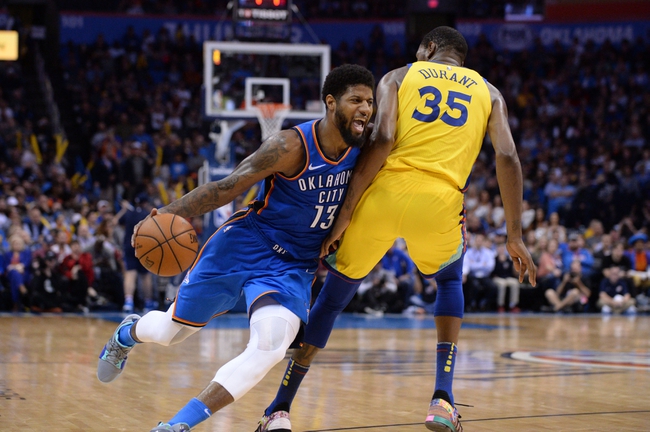 The Golden State Warriors play host to the Oklahoma City Thunder at the Oracle Arena in their season opener on Tuesday night.

The Oklahoma City Thunder will be looking to bounce back after getting bundled out by the fifth-seeded Utah Jazz in the first round of the playoffs last season. The Thunder were dealt a harsh blow when they lost Andre Roberson to that season-ending left knee injury and the experiment with Carmelo Anthony just didn’t work out. However, the Thunder fans were one of the big winners in the offseason as they were able to re-sign Paul George to a long-term extension while acquiring Dennis Schroder and Nerlens Noel. Russell Westbrook averaged a triple-double for the season once again, but had arthroscopic surgery on his right knee in the offseason and hasn’t yet been cleared for full contact drills which means he is likely to miss the first few games of the regular season.

Meanwhile, the Golden State Warriors will be gunning for a rare three-peat after sweeping the Cleveland Cavaliers en route to their second straight NBA Championship. Stephen Curry finished with averages of 26.4 points and 6.1 assists but played just 51 games during the regular season, Kevin Durant picked up the slack and finished with averages of 26.4 points, 6.8 rebounds and 5.4 assists while Draymond Green averaged 11.0 points, 7.6 rebounds and 7.3 assists. Being the team to beat in the league, the Warriors didn’t need to improve their roster at all, but that didn’t stop them from acquiring DeMarcus Cousins in one of the shock moves of the offseason. We likely won’t see this team at their best until late in the season as Cousins is recovering from an Achilles tendon injury, but at full strength, this starting lineup is clearly one of the best ever assembled, so it’s championship or bust for this season.

There’s always a chance that the Warriors will be a little distracted after raising another NBA Championship banner in the ring ceremony before the game, but it’s just tough to build a case for the shorthanded Thunder who will be without Roberson and probably Westbrook. The home team has covered in 16 of the last 23 meetings and the Warriors are 6-1 ATS in the last seven meetings at the Oracle Arena, so I’m going with the trends and taking the Warriors to kick off their season with a comfortable win.