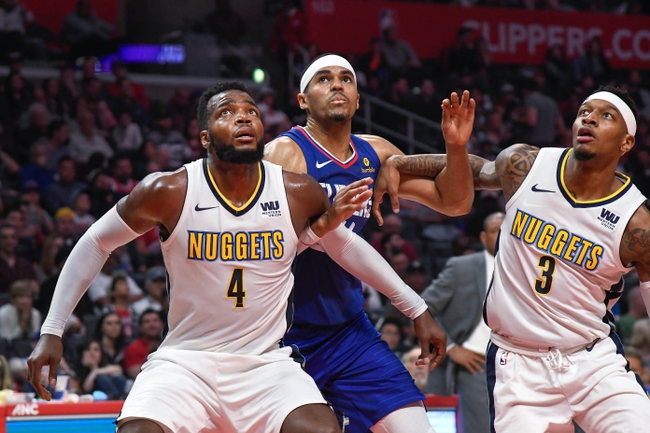 The Denver Nuggets and Los Angeles Clippers meet Wednesday in NBA action at the Staples Center.

The Denver Nuggets have improved their win total each of the last four years and hope to finally get back in the playoffs for the first time since 2012-13. Nikola Jokic leads the way for the Nuggets as one of the top bigs in the league, and Denver has one of the more underappreciated backcourts in Gary Harris and Jamal Murray. If Paul Millsap can stay healthy and the Nuggets can get anything out of Isaiah Thomas, Denver is a squad that can not only make the postseason but do some damage when they get there. With a roster that has just one player over 30 years old, the Nuggets are a young, exciting bunch that should have a chip on their shoulder as they hope to finally land a spot at the adult table. While it’s just one game, the Nuggets start the season with four of their six games against playoff contenders, so this is an early test for this young team. The Denver Nuggets have won three of their last four regular season openers.

The Los Angeles Clippers watched their six-year playoff streak come to an end last year, but they enter a new season with a deep, intriguing roster. The Clippers have one of the best defensive backcourts in the league in Patrick Beverley and Avery Bradley, while the addition of Luc Mbah a Moute provides another defensive body. Tobias Harris really started to come into his own last year and Lou Williams showed he’s still capable of taking over games even at 32 years old. If Danilo Gallinari can stay healthy and Marcin Gortat is capable of turning back the clock even a little bit, the Clippers will have a chance to steal a playoff spot from some team in the West. While I’m certainly in the minority, I’m actually more excited to see the Clippers potential this season than I am watching a flawed Los Angeles Lakers. The Los Angeles Clippers have won each of their last four regular season openers.

This is going to be one of the better games on a loaded Wednesday card, as it's two talented rosters who will be in the thick of things this season for a playoff spot. The Nuggets are probably the better team and certainly have higher upside, but I'm leaning Clippers here at home. I'm high on this Clippers roster and think their defensive effort will be the difference not only in this game, but in fighting for a postseason berth all year. The Clippers are going to surprise people this season, and it starts with a nice home opening victory over the trendy Nuggets.