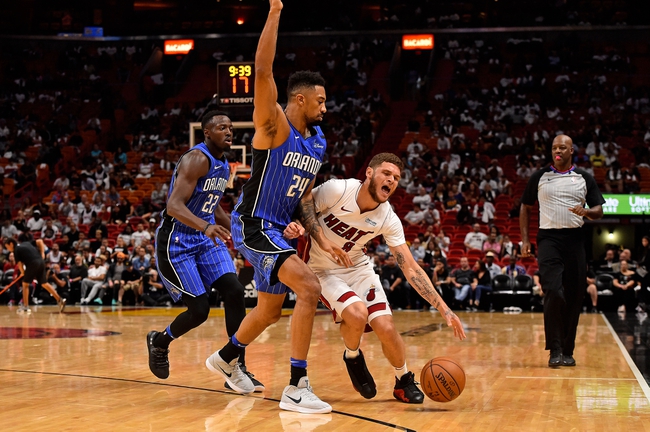 The Miami Heat and Orlando Magic meet Wednesday in NBA action at the Amway Center.

The Miami Heat are coming off 44 wins and have a chance to make the playoffs back-to-back years for the first time since the Big Three era. The Heat are pretty much the fact same team they were a year ago with the minor detail of Dwyane Wade being here for a full and final season. The Heat are a talented team given that they’re made up of gritty role players, and there’s potential to make a jump if Hassan Whiteside is capable of playing with the effort he played with before his big contract. Josh Richardson also balled out during the preseason and is somebody who could take his game to another level given his youth. However, there’s a ceiling on this current Heat roster, and that won’t change unless Pat Riley and company can finally strike the deal for Jimmy Butler. Until then, the Heat are an old school, physical team under underrated coach Erik Spoelstra that has a limit on where they can go. The Miami Heat have won five of their last six regular season openers.

The Orlando Magic haven’t made the playoffs since the Stan Van Gundy days, and they now begin a new era under coach Steve Clifford. The Magic have had a weird roster over the years, but there’s a lot of new players, especially on the bench this season, including rookie Mohamed Bamba, Jarell Martin, Jerian Grant and Melvin Frazier Jr. Maybe the youth movement sparks a fire to the rest of the team and leads to improved play. Nikola Vucevic and Aaron Gordon makes for one of the more underrated front courts in the league, but the guard play really limits where the Magic can go as a team. With a league loaded with talented point guards, career journeyman D.J. Augustin shouldn’t be a starter in this league. We also need to see Jonathon Simmons take that next step and be deserving of that contract he got. The Magic are still a mystery team in terms of direction. The Orlando Magic have lost four of their last five regular season openers.

The Orlando Magic have actually had great success recently against the Miami Heat for whatever reason, as even road games for the Heat in Orlando are pretty much home games given the much larger and loyal fanbase. With that said, I'm still taking the Heat and the small chalk. I don't trust the Magic much and the direction they're going until proven otherwise. The Heat are now entering their third year with pretty much the same roster and that chemistry should allow them to beat up on teams they're supposed to beat.