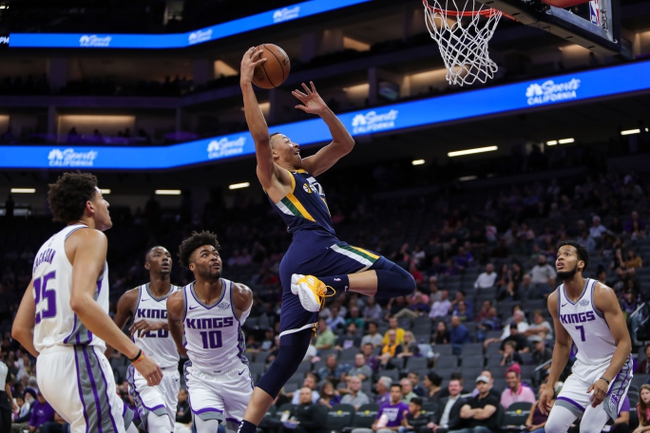 The Utah Jazz and Sacramento Kings meet Wednesday in NBA action at the Golden 1 Center.

The Utah Jazz are coming off a second round playoff appearance and have quickly become a popular pick to finish in the top-flour in the West this season. Donovan Mitchell proved to be a rising star his rookie season, Rudy Gobert is arguably the best defensive player in the league and Quin Snyder is one of the best coaches in the league who doesn’t get talked about enough. The Jazz have the key building blocks in place to be as balanced as a team in the NBA and are one of those teams nobody wants to see come playoff time. If Ricky Rubio can stay healthy and rookie Grayson Allen can contribute offensively off the bench, the Jazz have the potential to do some serious damage, which isn’t something we thought would be the case two years after Gordon Hayward left the franchise. The Jazz are certainly an intriguing bunch. The Utah Jazz have lost four of their last five regular season openers.

The Sacramento Kings haven’t made the playoffs since Rick Adelman was head coach, and their win total has actually dropped each of the last three years. There’s really nowhere to go but up for the Kings and pressure has to eventually be getting to head coach Dave Joerger, who is entering his third season. The good news for the Kings is that there are some promising young players on this roster, including De'Aaron Fox, Justin Jackson, Willie Cauley-Stein, Marvin Bagley III and Buddy Hield. The bad news is that the Kings haven’t seen much progress and have had talented players in the past. Remember, this is the same franchise that had DeMarcus Cousins for six full seasons and didn’t come close to sniffing the playoffs. Something has to give with these Kings eventually. The Sacramento Kings have lost three of their last four regular season openers.

The Utah Jazz are lightyears the better team here and should win big, but the Kings have been in these big underdog roles often and actually haven't been that bad. The Utah Jazz have failed to cover seven of their last 11 games when favored by at least six points. The Sacramento Kings have covered seven of their last nine games when an underdog by at least six points. The Kings have the athletes to push the Jazz out of their comfort zone and speed the game up. Also, two of the three meetings last season were decided by seven or less points. I'll take the Kings at home and the points.