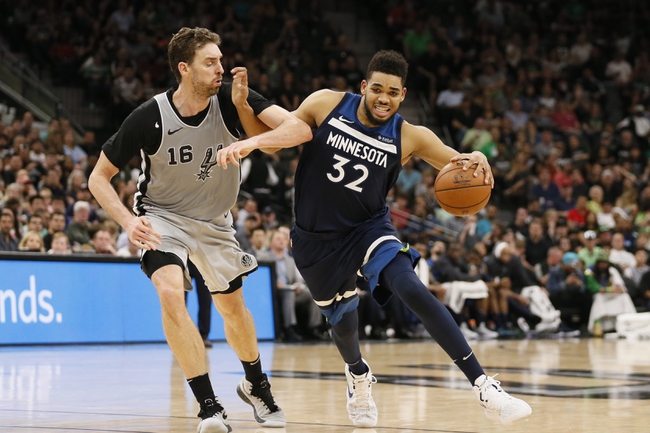 The Minnesota Timberwolves hope to kick off their season with a win as they battle the San Antonio Spurs at the AT&T Center on Wednesday.

The Minnesota Timberwolves will be aiming for another playoff run after sneaking into the playoffs with the eighth seed last season, breaking a 13-year playoff drought only to get squashed 4-1 in the first round. Karl-Anthony Towns averaged 21.3 points and 12.3 rebounds during the regular season but averaged just 15.2 points during the playoffs. Andrew Wiggins averaged 17.7 points, Jeff Teague averaged 14.2 points and 7.0 assists while Jimmy Butler led the team with averages of 22.2 points, 5.3 rebounds and 4.9 assists. The Timberwolves were just about silent in the offseason, except for Butler who made headlines with his attempts to force a trade.

Meanwhile, the San Antonio Spurs know all about the drama that comes from trade demands as they’re looking to start a new life without Kawhi Leonard. LaMarcus Aldridge led the team last season with averages of 23.1 points and 8.5 rebounds, Rudy Gay averaged 11.5 points while Pau Gasol averaged 10.1 points and 8.0 rebounds. The Spurs finished with just 47 wins last season, their lowest win total since the shortened 98-99 season which had just 50 games. Losing Leonard is tough for any team to overcome, but the Spurs also lost Manu Ginobili to retirement, they traded away Tony Parker and Danny Green only to lose Dejounte Murray to a torn ACL in a preseason game. The immediate future for the Spurs doesn’t look too bright and it seems like they’ll be lucky to even make the playoffs this season.

The Timberwolves have had a nightmare offseason with all the trade demands and internal drama, but they won’t be getting any sympathy from the Spurs who are going through a real rough patch of their own. The Spurs have owned this matchup in recent seasons and the Wolves have been a poor road team for as long as I can remember, but it’s hard to feel confident about the Spurs given all the injuries and personnel changes. This is certainly a game I’d rather stay away from, but if I had to choose, I’d lean towards the Spurs to scrape by and get the job done at home in this one.