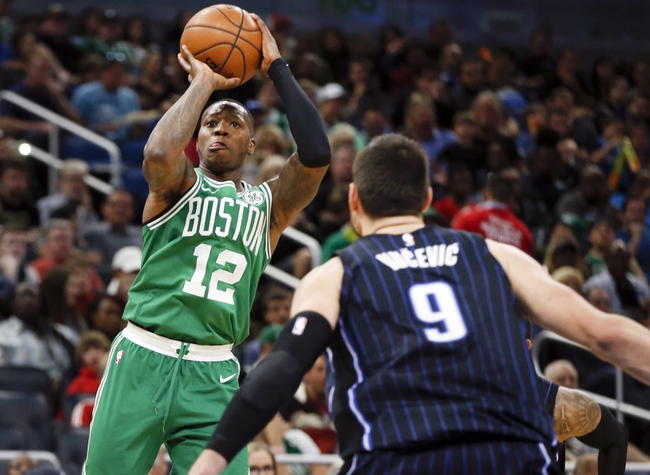 The Orlando Magic and the Boston Celtics duke it out at the TD Garden on Monday night.

The Orlando Magic will be hoping to avoid a third straight defeat after falling to the 76ers in a 116-115 road loss on Saturday. Evan Fournier led the team in scoring with 31 points on 12 of 23 shooting, Nikola Vucevic racked up a triple-double of 27 points with 13 rebounds and 12 assists while Aaron Gordon chipped in with 20 points and 12 rebounds. As a team, the Magic shot 45 percent from the field and 16 of 29 from the three-point line but they couldn’t keep a lid on the 76ers’ JJ Redick who scorched them with a total of eight three-pointers including the game-winner with just 17 seconds left on the clock. Gordon did have a chance to tie the game but missed his second free-throw in the clutch as the Magic missed a great opportunity to steal a game with the 76ers’ Ben Simmons leaving in the first quarter with stiffness in his back.

Meanwhile, the Boston Celtics have won two of their first three games to start the season and they will be looking to build on Saturday’s 103-101 road win over the Knicks. Jayson Tatum led the team with 24 points and 14 rebounds, Marcus Morris and Kyrie Irving each scored 16 points while Terry Rozier chipped in with 10 points off the bench. As a team, the Celtics shot just 40 percent from the field and nine of 25 from the three-point line as they narrowly escaped with the win after storming out of the gates to lead by as many as 16 points late in the first quarter. Gordon Hayward has been on a minutes restriction and sat out Saturday’s game because it was the second game of a back to back set, but he should be good to go for Monday.

The Magic will be kicking themselves as they were unable to capitalize on the early exit of the 76ers’ Simmons on Saturday, but their offense finally clicked and they were able to put up big numbers as a team. Meanwhile, the Celtics felt they probably should have cruised to victory after leading by 16 points against the Knicks in their last outing, but at least they were able to finish on top. The Celtics will be back at full strength with Hayward back in the lineup and they’ve covered in 27 of 39 meetings at home against the Magic, so I’m leaning towards the C’s to get the win and cover in this one.

The pick in this article is the opinion of the writer, not a Sports Chat Place site consensus.
Previous Pick
NBA Power Rankings for the Week Starting October 22, 2018 (After Week 1)
Next Pick
Milwaukee Bucks vs. New York Knicks - 10/22/18 NBA Pick, Odds, and Prediction