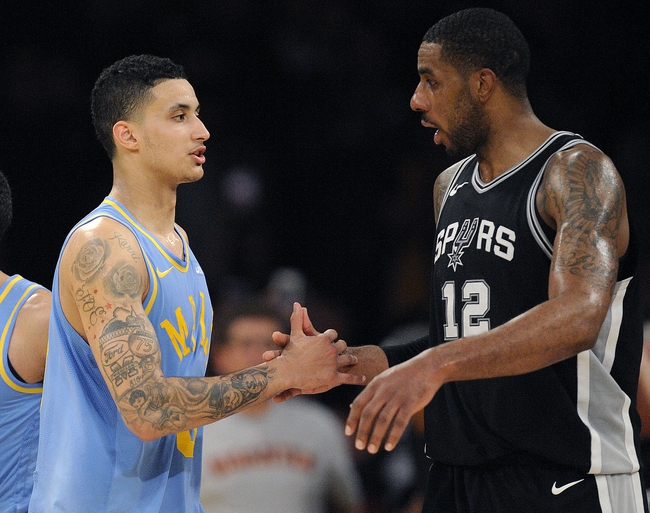 The San Antonio Spurs pay a visit to the Los Angeles Lakers at the Staples Center on Monday night.

The San Antonio Spurs kicked off their season with a narrow win over the Timberwolves but they will now be looking to bounce back after getting thumped by the Trailblazers in a 121-108 road loss on Saturday. DeMar DeRozan led the team in scoring with 28 points and nine assists while Bryn Forbes added 17 points, but the Spurs needed much more from LaMarcus Aldridge and Rudy Gay who scored just 12 points apiece. As a team, the Spurs shot just 42 percent from the field which just wasn’t good enough to hang with the Trailblazers who shot a healthy 53 percent from the field and 15 of 32 from the three-point line. With the Spurs shorthanded at the point guard position, there was just little they could do to slow down Portland’s Damian Lillard who scorched them for 29 points and nine assists.

Meanwhile, the Los Angeles Lakers are about to find out what it’s like to be shorthanded at a couple of positions as they will come into Monday night without the services of Rajon Rondo and Brandon Ingram who will both be serving suspensions following their involvement in the fight from Saturday’s 124-115 home loss to the Rockets. LeBron James led the team with 24 points and five assists but shot just nine of 22 from the field, JaVale McGee added 16 points with five blocks while Lonzo Ball made four three-pointers on his way to 14 points off the bench. As a team, the Lakers shot 48 percent from the field and just eight of 32 from the three-point line which was enough to hang with the Rockets until the fourth quarter where they were outscored by 26-18.

The Spurs haven’t quite looked like themselves at this early stage of the season and now they’re going on the road where they’ve covered in just one of their last 11 games, so they’re going to find it tough against the Lakers who have covered in each of the last four meetings between these teams. With that being said, the Lakers will be without two key players in Rondo and Ingram so a lot will depend on the play of James and other players like Lonzo Ball, Kyle Kuzma and Josh Hart. With that being said, this looks like a great spot for the shorthanded Spurs to come away with the win against the Lakers who are still going through some growing pains.