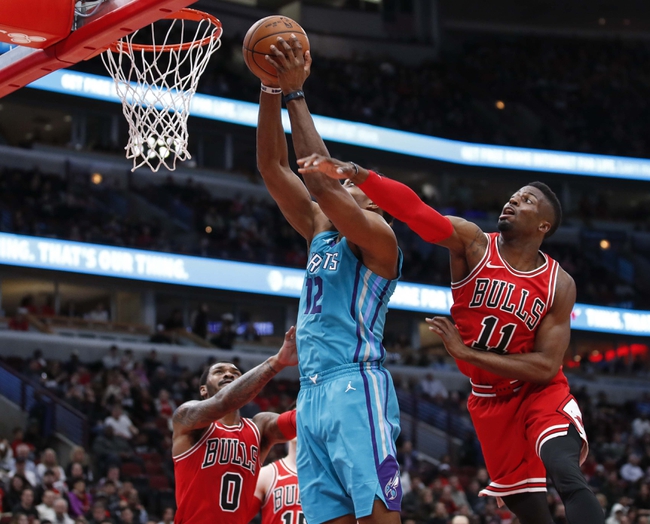 The Charlotte Hornets and the Chicago Bulls do battle at the United Center on Wednesday night.

The Charlotte Hornets will be hoping to cap off a four-game road trip on a high note after getting blown out by the Raptors in a 127-106 loss on Monday. Kemba Walker led the team in scoring with 26 points and five assists, Jeremy Lamb added 16 points while Nicolas Batum chipped in with 13 points. As a team, the Hornets shot just 42 percent from the field and nine of 28 from the three-point line but they were never really in the game after falling behind by 62-47 going into the halftime break. There was just no stopping the Raptors who shot a healthy 57 percent from the field led by 22 points from Kawhi Leonard and 16 points with 14 assists from Kyle Lowry.

Meanwhile, the Chicago Bulls have will be aiming to avoid a fourth straight loss after getting edged out by the Mavericks in a 115-109 road loss on Monday. Zach LaVine continued his hot start to the season with 34 points on 11 of 15 shooting, Jabari Parker added 20 points off the bench while Justin Holiday chipped in with 16 points. As a team, the Bulls shot a healthy 51 percent from the field and 13 of 23 from the three-point line but in a tightly contested game, it was the Mavericks who went on a late run to build a 14-point lead in the fourth quarter that proved the difference.

The Bulls are still without a win this season despite LaVine pouring in at least 30 points in each game but now they’re up against a Hornets team who were blown out in their last outing against the Raptors. It’s a battle of the point guards in this matchup as Walker and LaVine are bound to put up big numbers in this one, so while the Bulls weren’t too far in their last outing, I’d rather side with the more consistent Hornets who were doing well with their small-ball lineups until they ran into the league-leading Raptors on Monday.