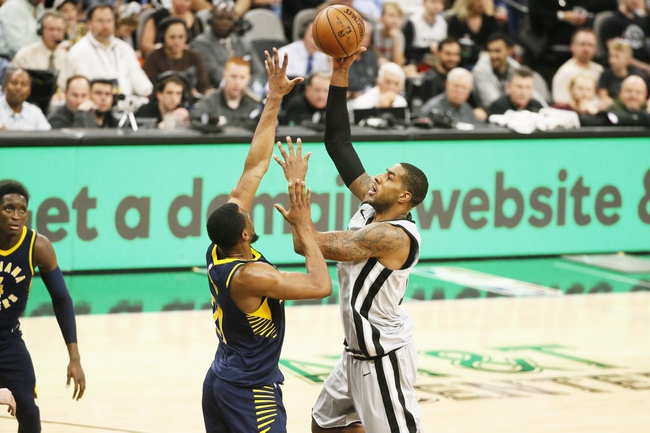 The Indiana Pacers invade the AT&T Center to take on the San Antonio Spurs on Wednesday night.

The Indiana Pacers have split four games to start their season and they will be hoping to bounce back after falling to the Timberwolves in a 101-91 road loss on Monday. Victor Oladipo led the team with 20 points but shot just eight of 23 from the field, Bojan Bogdanovic added 20 points on eight of 12 shooting while Myles Turner chipped in with 16 points. As a team, the Pacers shot just 39 percent from the field and eight of 26 from the three-point line as they wrestled with the Timberwolves for most of the game until the fourth quarter where they were outscored by 29-18. The Pacers were fine on the defensive end but they just didn’t get any production from their bench no reserve players scored more than Domantas Sabonis’ eight points.

Meanwhile, the San Antonio Spurs will be gunning for their third win in four games as they come into this one fresh off a 143-142 overtime win over the new-look Lakers. LaMarcus Aldridge led the team in scoring with 37 points, 10 rebounds and five assists, DeMar DeRozan added 32 points while Rudy Gay and Bryn Forbes each scored 16 points. As a team, the Spurs shot 51 percent from the field and an efficient 15 of 28 from the three-point line but the game went down to the final seconds of overtime and it was Patty Mills who delivered on a clutch game-winner to steal the game after LeBron James missed on a pair of free throws.

The Pacers have been very inconsistent to start the season as they’ve registered wins over the lesser teams like the Nets and the Grizzlies while falling to the Timberwolves and the Bucks. The Spurs are going through some growing pains as they’re still working out how to play with DeRozan in the lineup, but they’ve won two of three games and will be buoyed with their overtime win over the revamped Lakers. It’s hard to split these two teams as the Spurs seem more settled while the Pacers have covered in each of the last five meetings, but I’m giving the edge to the Spurs to get the win at home where they are 11-2 ATS in their last 13.