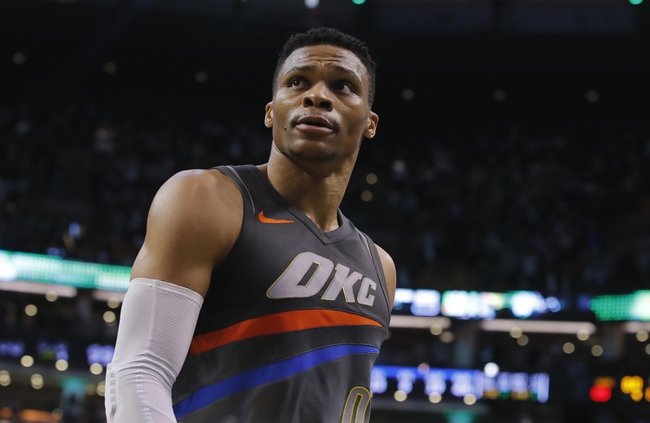 The Oklahoma City Thunder play host to the Boston Celtics at the Chesapeake Energy Arena on Thursday night.

The Boston Celtics kicked off their season with a big win over the 76ers but they’ve since cooled off with two losses in their last three games after falling to the Magic by 93-90 on Monday. Kyrie Irving led the team with 22 points and five assists, Al Horford added 15 points with four assists while Gordon Hayward chipped in with 11 points in 25 minutes of action but no other player finished in double figures as the Celtics shot just 40 percent from the field as a team and nine of 40 from the three-point line. Jayson Tatum scored just seven points on three of 12 shooting and no one on the bench could pick up the slack as the Celtics managed just 20 points in the fourth quarter.

Meanwhile, the Oklahoma City Thunder will be aiming to avoid a fourth straight loss to start the season after falling to the Kings in a 131-120 home loss on Sunday. Russell Westbrook led the team with 32 points, 12 rebounds and eight assists, Paul George added 29 points on 10 of 18 shooting while Dennis Schroder chipped in with 14 points and eight assists off the bench. As a team, the Thunder shot 44 percent from the field and just nine of 39 from the three-point line but their defense is still well below par as they allowed the lowly Kings to shoot a healthy 55 percent from the field.

The Celtics really haven’t looked like themselves over the past three games and the same can be said for the Thunder who are still searching for their first win of the season. On paper, it looks like a great opportunity for the Celtics to steal a win while the Thunder are still going through their growing pains, but the Celtics are anything but a sure bet as they’ve failed to cover in each of their last six road games. With that being said, I’m leaning towards the desperate Thunder to pull away with the win and cover at home in what should be a close one.