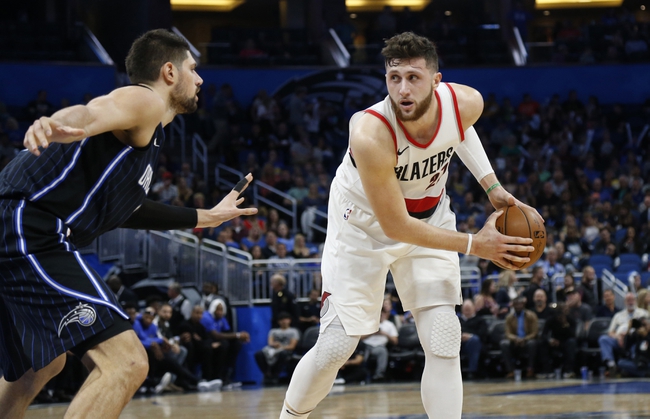 The Portland Trailblazers and the Orlando Magic duke it out at the Amway Center on Thursday night.

The Portland Trailblazers hit the ground running with home wins over the Lakers and the Spurs but they will be looking to bounce back after falling to the Wizards by 125-124 in overtime on Monday. Damian Lillard led the team in scoring with 29 points and eight assists, Jusuf Nurkic added 22 points with 18 rebounds while Al-Farouq Aminu chipped in with 16 points and 15 rebounds. As a team, the Trailblazers shot just 39 percent from the field and 11 of 39 from the three-point line so they could’ve done with more support from CJ McCollum who scored just 13 points on five of 25 shooting.

Meanwhile, the Orlando Magic were able to avoid a third straight defeat by beating the Celtics in a 93-90 upset road win on Monday. Nikola Vucevic led the way with 24 points and 12 rebounds, Jonathan Isaac added 18 points, Evan Fournier scored 14 points with 10 assists while Aaron Gordon chipped in with 13 points. As a team, the Magic shot just 40 percent from the field and 10 of 35 from the three-point line but they put together their best defensive performance of this young season, holding the Celtics to just 40 percent shooting and nine of 40 shooting from the three-point line.

The Trailblazers have been one of the hottest teams at this young stage of the season but they fell just short in that overtime loss on Monday. The Magic have been a little hit and miss to start the season but they were impressive in holding off the fully loaded Celtics in their last outing, so an upset wouldn’t be out of the question here. With that being said, the Trailblazers could easily be 3-0 to start the season so I think they get things back on track with a win and cover here behind a bounce-back performance from McCollum.